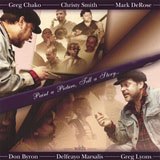 Perhaps reviewing guitarist Greg Chako's Where We Find Ourselves (CPB, 2006) and Two's Company, Three's A Crowd Jazz Duets (CPB, 2006), explains why his adventures, both musical and otherwise, remain amazing.

From Boston's Berklee College of Music, Chako relocated to New York, where he discovered his talent for culinary arts. In Amherst, Massachusetts, working as a chef, Chako found that he had talent as a jazz promoter of concerts and festivals, which also gave him access to top-level musicians. He then returned to his home town of Cincinnati, Ohio, where he became a bandleader, booking agent and educator. His musical career came to a temporary halt when Chako developed Carpal Tunnel Syndrome. He relocated to Hong Kong, where an Asian woman (later his wife) found that Tai-Chi was able to restore his wrist for working again. Moving yet again to Singapore in 1994, Chako found himself in a long-running gig at the famed Raffles, one of the world's most famous bars.

Despite losing his wife to cancer, Chako continued his musical career, and came to record several albums which emphasized his own compositions in duets with pianists as well as a female vocalist. On Where We Find Ourselves, Chako most important contribution was rewriting jazz and pop standards including Johnny Mandel's "Emily and Jule Styne's "It's You Or No One," renaming them "Takachan" and "It's Only You" respectively. On Two's Company, Three's A Crowd Jazz Duets, the tunes consisted entirely of well-chosen titles from the Great American Songbook.

Paint A Picture, Tell A Story is Chako's eighth album, and a different one. The guitarist's trio of bassist Christy Smith and drummer Mark DeRose (who are also westerners living in Asia) is joined by trombonist Delfeayo Marsalis; multi-reedman Don Byron and, although not as well-known, saxophonist Greg Lyons. On previous albums Chako enjoyed plenty of solo space to display his Wes Montgomery-style octave playing; with this larger ensemble, Chako provides a fair amount of comping to accommodate this piano-less group.

In the past, Chako has displayed his ability to write tuneful originals, as well as being able to interpret standards in a swinging and lyrical fashion. On this album, he is able to present six new original tunes, leaving room for material from Billy Higgins and Frank Wess, as well as two pieces from the Great American Songbook.

On tunes such as Chako's "What da' Funk!" and "Hurry Up and Wait," Byron is heard effectively on both bass clarinet and tenor sax, with Marsalis bringing a tailgate trombone straight outta N'awlins. Tablaist Joe Jayaveeran and mridangam player Jayagrowtham add more texture. Chako, in a guitar trio setting only, offers up Rodgers and Hammerstein's "People Will Say We're In Love" and Redding's "The End of a Love Affair," reminding us of his fine techniques and keen ear for melody.

Cycles; Next; Murtabop; Ballad for Andy; Marilyn's Dilemma; Hurry Up and Wait; What da'Funk!; The End Of A Love Affair; With Full Heart and Teary Eyes; People Will Say We're In Love.