Flamenco music is full of intense passion, fire, boiling emotions and grace. It is a profound and moving experience for everyone witnessing a true artist performing in this tradition. The music evokes a wide range of emotions—joy to despair, serenity to anger, happiness to sadness. The amount of emotion and passion displayed by these artists can be so overwhelming and enchanting that is sometimes unbearable. When first heard, it is the passion of the artists that ignites the soul of the listener.
The flamenco world is best portrayed by legendary guitarist Paco De Lucia. One can say that in the past few decades, he has been the symbol of flamenco music. De Lucia is one of the closest examples of a perfect guitarist. There is nothing his guitar won't play, do or say. He is a personification of the Spanish guitar, turning this musical style into a world phenomenon. His work and playing casts a long shadow to which other guitarists are always compared.
Among the many laudable qualities of a De Lucia concert is that it has all the necessary elements of strength, style, grace, stillness and tenderness, sometimes incorporating all of these elements into one single performance or composition. He comes from a rich and old tradition, but he has injected a large dose of the vanguard—a boldness and a different creative impulse—within that tradition. What is interesting is that his innovations sit comfortably with the tradition. 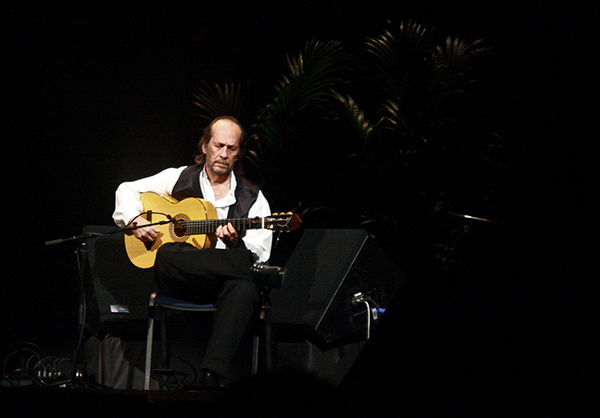 De Lucia's concert at the 11th edition of the Guitar Art Festival was the first station of his European tour. The concert began with a solo guitar piece showing techniques that seemingly defied human limits. But instead of showing off with an empty virtuosic display of dexterity and a rushed flurry of notes, he let his emotions be his guide, playing fluently and flawlessly, and showing a fine balance between his arsenal and lyricism. Though De Lucia's music is deeply rooted in flamenco music, it was evident that some of his ideas were not from the flamenco world. Nevertheless, his expression clearly was flamenco.

He was soon joined by his ensemble—percussion, rhythm guitar, keyboards, and vocals. The band altogether elevated the music onto a different and more dynamic plateau. Suddenly, the stage at Sava Centar became "juerga," the environment where flamenco music usually occurs or an informal gathering where people are free to join in creating music. The group stamped their feet, clapped their hands, encouraged by the familiar shouting. With such a natural intensity and astringency, their music warmed up the coldest hearts; it uplifted a downtrodden soul, and it surely mesmerized the unfaithful in the audience. That is the effect of the "duende" that the musicians and their music possessed. Each note was observed carefully, and the audience rewarded each masterstroke with applause.

Singer David de Jacoba's soulful vocals showed why, in the flamenco tradition, the singers are the most important segment. One treat was the performance of dancer/singer Farruco. He danced with such intense enthusiasm, full of dramatic and graceful movements, easily drawing applause from the audience, which followed his every movement with enthusiastic astonishment. With a succession of breathtaking moves, quick feet drumming and the display of visceral energy, Farruco, taken by the power of the ensemble, portrayed a fair, visual picture of the music the ensemble played that evening.

The show ended with cheers and standing ovations. Paco de Lucia and his group showed his mastery of their instruments, and de Lucia highlighted the music for which he is lauded. The touching music, the passionate singing and the graceful dancing effortlessly took the audience to the heart of Andalucia. All in all, it was a magical evening and a night to remember.