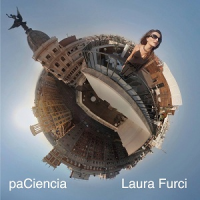 We have talent among us that often receive little more than local notice and are deserving of much more. I have followed singer/composer/producer wunderkind Laura Furci for the past decade and hers is just such a talent. Classically-trained as a pianist, Furci expanded her creative perimeter to include vocals and composition, molding a musical direction that pierces the artistic horizon we currently realize. Furci is an innovator constantly pushing her art. Her first recording was the 2010 EP Out of My Comfort Zone (Magnetica). This was a mere taste of her potential which she expressed fully on Think Con La Tua Cabeza (Magnetica, 2013).

Furci follows Think with another provocative EP, paCiencia, a collection of six brief and powerful compositions: three in English and three in her native (and beautiful) Italian on which she performs with just her keyboard accompaniment. "All Notes Taken" readily displays Furchi's passion and musicality as she passes through a dozen musical styles and at least two time shifts that take her voice from a gentle and carnal purr to pathos-filled cry from some mad analyses. Despite this description, the song is tightly conceived and focused, revealing Furci's compositional skill. The song is full Weimar Cabaret, haughty blues, dramatic balladry, and urgent contemporary angst. She proves a master at blending and bending styles to her creative whim. Furci is on the edge of something big...let's watch her grasp it.