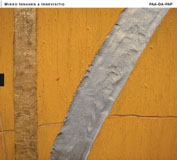 Doubtlessly here is a man and a band whose names raise few eyebrows, except for the surfeit of n's. But open the package and there are queries a-plenty. Is that repeated ticking really coming from the CD, or is the old CD player giving up the ghost? What is that slightly hollow bass sound behind the trills and spills of that Coltrane-inspired alto sax? Is there some vinyl being "scratched between dueling shouts and barks on "The Grey Adler Returns ?

Needless to say it's just the band doing their thing, recorded live in the Jumo Jazz Club in Helsinki and other towns during its 2006 Finnish tour. It's a fine record of those tight sessions, in small clubs around the country, where 29 year-old saxophonist Mikko Innanen put his team through its paces, and a long way from the band's inauguration at his academic pass-out ceremony in 2003.

As witnessed at the late May 2007 CD release in Helsinki, the band has now cast academic prudence to the wind, performing with a mixture of reckless aesthetic abandon and tight, interdependent harmonization. And although he's recorded and played on the Finnish and European jazz circuits since 2000, this is the first time Innanen has led from the front.

Bolstered by veteran Finnish keyboardist Seppo Kantanen, working hard with keyed bass or ethnic tinged accompaniments, and contrasting the presence of the dual-reed front men, Innkvisitio ventures close to progressive areas, like on the extended "Berber. The album features other pieces ("Anselmus & Serpentine and "Paa-da-pap ) where second reedist Timo Lassy takes to the flute and leads drummer Joonas Rippa and Kantanen on a merry dance, around riffs and rhythms that would have been familiar to Eric Dolphy.

However, there's a definite levity in the proceedings and, after this dazzling bebop, "The Original Vasarankyla Stompers' Reunion sounds like a Dixieland band caught in a time warp, evolving into a light-hearted drum solo, which one must assume also features the cited "neck glockenspiel.

Innanen includes, in his varied arsenal, children's pan flute, yak wacky, and sundry plastic objects. But despite admitting in the label's ever-attractive liner notes that some of this music is the result of his discussions with the birds (including the title), the album is a serious attempt to bring to the public "the sort of music he likes(sic) to listen to. I think he succeeds.