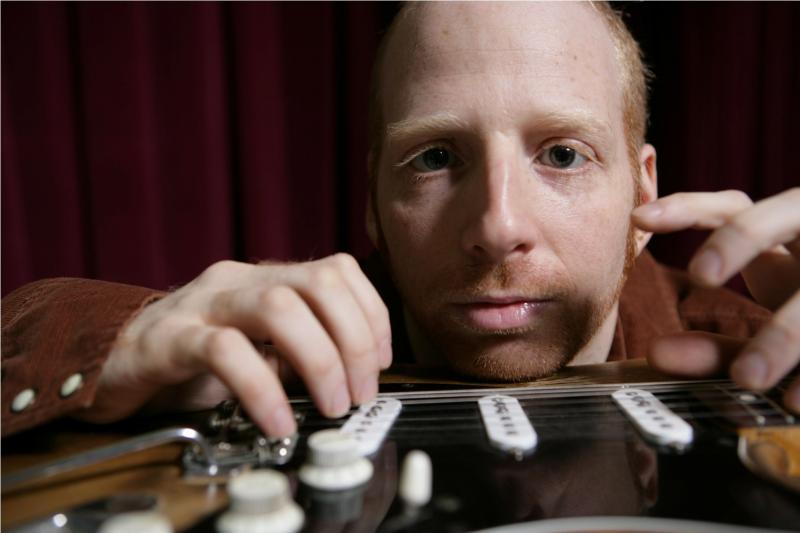 By IAN PATTERSON
September 2, 2014
Sign in to view read count

I try not to diversify too much because I like the sound of a band and that means you have to play with the same guys for a while. —Oz Noy

Any blues played by Oz Noy would have to be a little twisted. Drawing on influences ranging from the classic jazz guitarists of yesteryear to the trailblazers of more recent vintage, Noy's instantly recognizable voice is also heavily influenced by blues and heavy metal guitarists.

Two and a half years have passed since Twisted Blues Volume One (Abstract Logix, 2011), Noy's electrifying, knotty and visceral take on the blues featuring an all-star cast of the guitarist's regular collaborators. The format is pretty much the same on Twisted Blues Volume 2 (Abstract Logix, 2014), with old sparring partners joined by guests of the caliber of Chick Corea and harmonica ace Gregoire Maret.

The sparks still fly on Volume 2 but the title could just as easily have been Twisted Jazz, Twisted Rock or Twisted Funk. It's all there in Noy's intoxicating mix. "I feel like it's all one thing," says Noy. "These last two records, at least from the writing perspective were coming from the blues form but what I do is more jazz."

No blues festivals have come knocking on Noy's door since Volume 1 earned such positive reviews in 2011 but Noy just laughs it off: "It doesn't really surprise me because a lot of the blues festivals are really narrow. They're very blues and what I do I consider to be jazz. The last two records have just been bluseier than what I've done so far but it's not your typical blues."

The title of these two CDs hints at one of the principal guiding hands at work: "The first tune on Twisted Blues Vol 1 was written over "Twisted Blues" by Wes Montgomery," explains Noy. "The chords are kind of similar." Noy is quick to acknowledge Montgomery as a formative influence in his playing: "Oh yeah, big time. I used to be a Wes Montgomery clone when I was growing up."

If Montgomery's chordal progressions and sophisticated harmonics are somehow embedded in Noy's DNA, so too are the voices of the modern masters. On several tracks on both Twisted Blues Volume 1 and Twisted Blues Volume 2 John Scofield's searing brand of jazz-funk rears its head.

"Of course," says Noy. "I like all those guys like Scofield and Pat Metheny, Bill Frisell, Mike Stern and John Abercrombie—all those guys who opened up the jazz guitar. I love Jim Hall—he's an influence on me too, but they basically took what Jim did, what jazz guitar was then and they opened it up, taking the sound and improvisation to a whole new level."

Twisted Blues Volume 1 featured eleven outstanding musicians, including Noy regulars Anton Fig and Will Lee. In fact, with the exception of Vinnie Colaiuta, all the musicians who turned out first time are there again on Twisted Blues Volume 2. And then some; the cast has risen to seventeen, with no two tracks featuring the same line-up.

Noy is no stranger to diversity. One look at his CV reveals a musician who is nothing if not open-minded. Since moving to New York from his native Israel in 1996 Noy has played with popsters Cyndi Lauper and Nelly Furtado, alt-country icon Alison Krauss, jam band kings The Allman Brothers, world music stars Angelique Kidjo and Richard Bona and a veritable host of jazz notables.

"I love diversity for the sound of the music," says Noy, "but the down side of it is that I don't like to play with somebody just once. I like to play a couple of gigs until we connect and make the music gel. I try not to diversify too much because I like the sound of a band and that means you have to play with the same guys for a while. Most of the guys I played with on these two records are guys I've played with for many years. Whenever I use certain people it's always for a reason. It depends on the music."

Twisted Blues Volume 2 seems to have taken a long time to brew, coming on to nearly three years after Volume 1 but in fact, the recording sessions were pretty quick as Noy explains: "Volume 2 took a while to make because I was very specific about who I wanted to play on what song. Sometimes it just takes time to get the guys you want in the same room together. It was only three or four days of recording but it was spread over a year in order to get everybody's schedules to line up."

Noy certainly had former Stevie Ray Vaughan sidemen Chris Layton and organist Reese Wynams in mind for several rollicking tunes on both CDs in homage to the Texas blues legend. "Whole Tone Blues" from Twisted Blues Volume 1 is almost indistinguishable from the real thing, while tracks like "Come Let Me Make Your Love Come Down" and "Blue Ball Blues" from Twisted Blues Volume 2 also have a heavy dose of Vaughan's magic in the veins.

"He was a huge influence," says Noy of Vaughan. "He was really big at the time when I started to get into blues in the early 1990s. I became a kind of a Stevie Ray Vaughan clone and then I realized that I had to dig a little deeper than him so I went back to the older guys, like B.B. King, Freddie King and Albert King."

The pure, clean sound of B.B. King, the funkier, rawer sound of Albert King and the driving energy of Vaughan merge with Noy's jazz aesthetic to create an extremely visceral, soulful hybrid. Then there's the wilder, rock-influenced side to his playing, which is never too far from the surface.

All the musicians on Twisted Blues Volume 2 kick up a storm, but none more so than Maret, arguably the premier jazz harmonica player on the planet. His freewheeling solo on Stevie Wonder's "Come Let Me Make Your Love Come Down," driven by Noy's churning riffing provides an album highlight: "Oh, he's incredible," enthuses Noy. "I've played a few gigs with him over the years so when I decided to use a harmonica he was the first guy I thought of. He's extraordinary."

Another guest musician who shines is Eric Johnson, whose comping and solo on the smoldering "EJ's Blues" is a delight: "I'm a big fan," confesses Noy. "I love his playing and I got to know him in the last few years. If I was in Boston I'd sit in with his band and if he was in New York he would sit in with my band. That song was heavily inspired by him. I had that riff for years and when it was time to make the record I decided to write something that Eric and I could play together."

An embarrassment of riches could describe the stable of musicians that Noy had at his disposal for both CDs. New Orleans legend Allen Toussaint brings a touch of soulful R&B, while John Medeski serves up his inimitable jazz-funk. Most of Noy's regular cohorts are also present on one or both of the Twisted Blues CDs: "It's either Anton Fig or Keith Carlock on drums and then Will Lee or James Genus on bass," says Noy. "Those are the guys in New York. When I tour a lot of the time I use Dave Weckl. If I'm on the West coast I'll use Darryl Jones on bass."

The faces on both CDs are by and large the same, and something else that hasn't changed much in the time between the two CDs is Noy's gear: "I try to keep up with it but a lot of stuff hasn't really changed in the guitar world. People do stuff all the time in the guitar world but to me a lot of it has been done already. I keep my ears open and if something really strikes me then I'll try it but a lot of times a lot of those things are just versions of stuff that's already been around."

Although two and a half years separate Twisted Blues Volume 1 and Twisted Blues Volume 2, Noy certainly hasn't been idle, producing two instructional DVDs that showcase the guitarist's approach to composition and improvisation: "I'm really proud of those DVDs," admits Noy. "I think it's one of the best things I've done. They're really, really simple, but from simplicity comes complexity. The tools are really simple and that's why I'm proud of them."

Whose instructional DVDS was Noy himself weaned on? "When I grew up in the 1980s there were no DVDs, no internet. We had video cassettes. I had loads of instructional videos but most of them were the heavy metal guys -Paul Gilbert and Greg Howe and Richie Kotzen. But a friend of mine brought me a video of a Wes Montgomery live show and I played that so much I just destroyed it."

Everything has a natural lifespan, whether it's a video cassette or a band. One of Noy's most notable collaborations in recent years was the collective BANN, which also featured Seamus Blake, Jay Anderson and Adam Nussbaum. The quartet made one outstanding CD, As You Like It (Jazz Eyes, 2011) before petering out.

"That band never really took off. It's not a real working band." says Noy. "We did a couple of European tours and that was really it. In the last few years we had a hard time getting booked in Europe so the whole thing kind of fell apart. I really loved that band. It just kind of fell to pieces." Noy doesn't rule out a second go round: "We've been talking about it," he says, "but there has to be a reason to record."

Noy is set to embark on a tour of Asia. With a record licensing deal in Japan, Noy has gigged there plenty of times over the years, but this tour, which also takes in China, Hong Kong, Taiwan and Thailand breaks new ground for him: "This is the first time I do a real Asian tour, traveling all over Asia. It's a pretty big deal to be able to get there. I've been really lucky, I've been to Japan a bunch of times but it's not so easy any more so I'm really happy about the Asian tour."

Having done two Twisted Blues CDs Noy feels it's time for new pastures: "When I finished the Volume 2 record I felt like, I'm done with this. If anything I'll probably do a jazz record but in my own way. Last year I did a bunch of stuff with John Patitucci and Jeff "Tain" Watts and that's something I would love to record. I'll still be playing my Strat but it'll be more like acoustic—jazz standards."