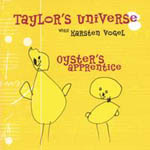 If I learned anything on my recent trip to Punktfest in Norway, it's that there's a world of music out there which is lucky if it even receives a passing nod in North America. The internet has made it possible to gain access to much of this material, although one has to know where to look. The stylistically flexible Danish multi-instrumentalist Robin Taylor nearly gave up music at one point, like so many before and since—but beginning in the mid-1990s, he began releasing albums under his own name, Taylor's Free Universe and Taylor's Universe. This release by Taylor's Universe, Oyster's Apprentice, begs the question: "Where have I been?

Unlike TFU, which is more improvisation-based, Taylor's Universe focuses on Taylor's considerable skills as composer and sound sculptor. Generally symphonic progressive rock with a variety of references, Oyster's Apprentice's eclecticism succeeds despite itself through a thematic approach to composition that threads its way throughout the record regardless of style.

While Taylor's writing maintains a structural framework throughout, there are moments closing in on pure abandon. There's nothing similar about its shuffle rhythm, but there's something about "Ghost Reporters that's reminiscent of recently deceased Canterbury drummer Pip Pyle's "Foetal Fandango, from his 1985 album Equipe Out. Saxophonist Karsten Vogel—a 1960s avant-garde pioneer and a founding member of the 1970s progressive rock group Secret Oyster—creates an alto horn section singlehandedly for the song's infectious melody. But the centerpiece is guitarist Jon Hemmersam's solo, which begins on the inside but gradually moves towards greater extremes, approaching anarchy before reaching a climax that suddenly returns to the song's original theme.

"That Strange Plaza is episodic in nature, beginning with a harmonium pedal tone over which Taylor layers edgy electronic noise. Drummer Rasmus Grosell begins to push a four-on-the-floor rhythm as the song becomes a feature for Hemmersam's electric sitar, only to shift into a paradoxically moody yet rhythmically focused section where Taylor's arpeggiated keyboards underpin Vogel's lyrical solo.

Even when the meter is irregular, as it is on the all-too-brief "Joe Hill's Recorder, Taylor's memorable melodies provide a hook to hang on. Taylor's work is sometimes reminiscent of Mike Oldfield, similarly building layer upon layer of instruments to create songs that retain a surprising immediacy, even though they're clearly being constructed over time. "Lost Title centers around a repetitive arpeggio, but Taylor's layers of piano, synthesizers and guitars, along with Vogel's saxophones and clarinet, create a vividly orchestral sound. "Vue (Time Bolero) evokes King Crimson's "The Devil's Triangle and "Bolero-The Peacock's Tale —dark and dramatic, though never as chaotic as the former or as overtly jazz-like as the latter.

That Taylor has nearly twenty albums out under his name, Taylor's Universe and Taylor's Free Universe is the real surprise. Oyster's Apprentice is a strong entry point, though it's only one aspect of this surprising discovery's musical talents.