By EYAL HAREUVENI
January 1, 2012
Sign in to view read count 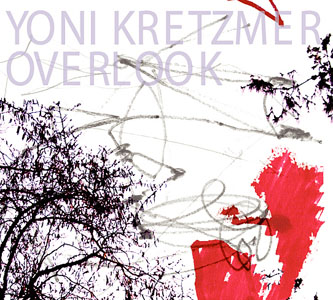 The third solo release by Yoni Kretzmer, now based in New York, features the young Israeli saxophonist leading the recorded debut of a quartet of close friends who have been working together for few years now. As can be heard on his previous releases, Kretzmer is a highly skilled composer and arranger, and an excellent improviser. On Overlook, it is clear that he was aiming for a delicate balance between the tension-building of composed parts and the cathartic release of improvisation.

Overlook is nine-part suite with recurring themes and infectious and sweet melodies weaved wisely and patiently throughout, with enough room for more energetic free improvisations. The quartet features sympathetic players on the composed parts of this suite, especially bass clarinetist Nitai Levi, who brings to mind a young John Surman in his expressiveness, and adds contrasting dark colors to Kretzmer's bright tones. Bassist Shai Ran and drummer Haim Peskoff offer a solid base.

But when Kretzmer begins his uncompromising fiery solo runs on "Broken Parts," much more on "Trauma," and even in the probing parts of the balladic "Eyes closed," it feels as though the rest of the quartet has been left behind—not countering his outbursts with similar energy or even with a looser interplay that might have challenged him. On these segments it is quite clear that Kretzmer is well-versed in the long history of free improvisation and contemporary music, with a unique and authoritative personal vocabulary that references saxophonists including Ellery Eskelin and Mats Gustafsson, while the other players sound as though they are just beginning their experiences in freely improvised music.

Still, this tension between the thoughtful and elaborated structure of Kretzmer's compositions and his determination to deconstruct these structures and reconstruct them again and again is what makes this recording so special.