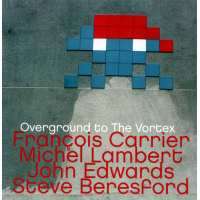 The adventures of François Carrier continue with Overground To The Vortex. The well-traveled Canadian saxophonist has recorded in Nepal—KATHMANDU (FMR, 2008), St. Petersburg, Russia with All Out (FMR, 2011) and In Motion (Leo, 2011), of course Canada Entrance 3 (Ayler, 2011), and this release in Great Britain, where he made his Shores and Ditches (FMR Records,2012).

His improvisational voice lends itself to collaborating with others, as he is an astute listener and a master of teamwork. He has recorded with Uri Caine, Bobo Stenson, Paul Bley,Gary Peacock, and Dewey Redman. His most frequent partner, drummer Michel Lambert joins him on this live recording at the Vortex Club in London in December 2011. Carrier and Lambert, here with local legends, pianist Steve Beresford on two tracks, and bassist John Edwards on all four tracks.

His saxophone voice tends toward an undisguised improvisational swirl that billows notes be they rapid fire squawks, tranquil blown and overblown notes, or tension-built runs. With Edwards and Lambert on the first two tracks, the saxophone dances to the bowed bass, darting, flitting and hopping as Lambert turns the heat up, working the thermostat that is his kit. Carrier announces himself with an Albert Ayler-call on "Mile End" that draws lines through the jazz map from 1966 through Joe McPhee's work in the 1970s, to Evan Parker.

With Beresford in the mix the situation fractures. The pianist, a contrarian by nature, often zigs when the others have zagged. His playing partners are ready and very willing to accommodate the ruckus. Edwards is an old hand at it, but Lambert and Carrier are also up for the varying directions and the improvised prescription. The two lengthy pieces fluctuate from loud to soft, tense to serene, but always transforming and reorganizing. The varying ebb and flow of this live date maintains charm until the end.