Jimmy Scott: Over the Rainbow 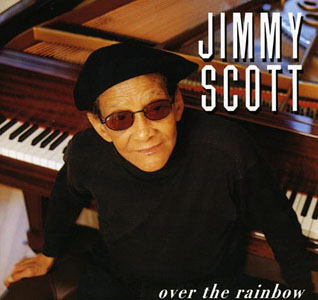 Though age may be taking its toll on the unmistakable voice of Jimmy Scott, that is not stopping the "Little" (in physical stature only) legend from making the most of his recent renaissance. No longer considered a novelty, this powerful performer is putting out some of the best work of his career. With the support of fellow big swingers like George Mraz and David "Fathead" Newman, Scott squeaks and struts his way through some of the great unsung (or at least less sung) selections from the Great American Songbook. From a dreamy, vibe-drenched trip through Harold Arlen’s "Over the Rainbow" to a well thought out exposition of Johnny Mercer’s epistle ending "P.S. I Love You," Scott uses his frailties to an advantage. His take on "Strange Fruit" is strongly reminiscent of Lady Day’s signature version, filled with fear and loathing of our cultural history. The spare, piano only version of Ellington’s "I've Got It Bad (And That Ain’t Good)" captures the Duke’s flair for simplicity and class. And when Scott signs off by asking "When Did You Leave Heaven?," you might want to ask him the same thing, for, though the voice may be a bit fallen, it remains the voice of an angel.

Pennies from Heaven; Over the Rainbow; All or Nothing at All; Strange Fruit; Don't Take Your Love from Me; Just Friends; P.S. I Love You; Everybody.