Paulette Dozier: Over & Over Again 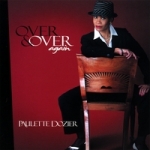 Right out of the gate the listener will know that singer Paulette Dozier is an entertainer. The fact can readily be heard in her perfectly balanced alto, a voice crisp and confident, a voice that serves her well. The second thing the listener will note is Dozier employs a crack band and arranger in pianist Mike Levine, who proves no rear in his mixing of pop and jazz.

Over & Over Again is Dozier's second self-produced recording, her first being her 2006 With You, a release characterized by the same fine craftsmanship as the newer release. Paulette Dozier turns out to be the authentic item, singer, stage performer, provocateur.

Dozier mixes old and new standards with an emphasis on the new. Two Chicago songs are covered in "Does Anybody Really Know What Time it Is" and "Saturday in the Park" (featuring a piquant David Carder trumpet) each deliver faithful to the original but with jazz authority and grace. Another "new standard" is Al Green's "Let's Stay Together," performed up tempo with verve.

Saxophonist Ed Calle shows up on the disc opener, "You'll Never Know." He lends a genre-stretching solo to the piece that places it on the fulcrum between pop and jazz. Dozier's own "Over and Over Again" is a sexy playful piece not bashful in expressing the singer's intentions, just as Dozier's take on Van Morrison's "Moondance." Dozier turns the tables on the boy's club and shows that she can give as good as she gets.

Over & Over Again is a full-bodied treatment of originals and standard set in thoroughly modern arrangements that never allow the material to descend in to the tepid smooth jazz waters. Paulette Dozier must really be something live.

You'll Never Know; Over and Over Again; Moon Dance; Does Anybody Really Know What Time It Is; Together Yet Alone; Moonlight In Vermont; The Very Thought of You; All of Me; Saturday In the Park; Let's Stay Together.