Free Radicals: Outside The Comfort Zone 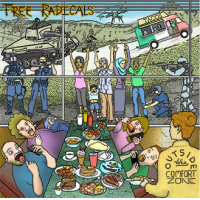 In their publicity blurb, Houston-based Free Radicals describe themselves as "a horn-driven instrumental dance band with a commitment to peace and justice." In 1998, the Radicals' debut album The Rising Tide Sinks All warned against George W. Bush's Iraq war four years before it began. 21 years on, and with Outside The Comfort Zone, the band is sounding alarm bells to warn about the rise of rampant racism, xenophobia, nationalism and human rights abuses.

The band certainly evinces a veritable cornucopia of eclectic styles, from the mariachi-sounding "The Legals Have A Lunch" to reggae ("Doomsday Clock," "Survival Of The Oblivious" and the Gong-esque "Space Witch"). There's plenty of salsa as heard on "Chicha Revolución." The blues is represented too with numbers like the perky "Carry Me To My Grave." There's a Charles Mingus / Carla Bley element with the catchy, riff-laden "Screaming." The band stretches out on funkier numbers such as "Angola" and the frenetic "Manifest Dust Bunny" gives way to the more stately-paced "Water Beats Rock."

The menacing "Audacity Of Drones" is underpinned by an insistent obligato vamp and there's a nod to Charlie Parker with the boppy "Scrapple From The DAPL." The stereo percussive opening to "New Sanctuary Movement" is almost worth the entrance fee alone, followed by the Santana like "Cabinet For Sale" augmented with huge brass ensemble. The penultimate track though is the clincher, Sun Ra's "A Call For All Demons" proves, if it even needs proving, that this is no "comedy" band despite the prodigious variety of styles and cartoonish cover art. If anything, these Free Radicals seem to have taken on the mantle of that other non-comedy band, the late-lamented Waka Jawaka ensemble, as led by Frank Zappa.The comparison is even more appropriate since Zappa himself was not averse in his satirical compositions to drawing attention to the iniquities of society. At nearly 70 minutes and replete with no fewer than 23 tracks this is an intriguing listen and this band is definitely worth listening to.