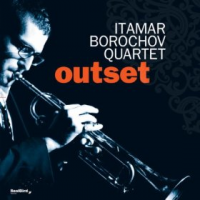 Israeli trumpeter Itamar Borochov landed on U.S. soil in 2006, eager and ready to start studying at the New School for Jazz and Contemporary Music. Now, eight years later, he's stepping out with his aptly-titled debut—Outset.

While this marks Borochov's maiden voyage as a leader, he's already received some well-deserved attention for his work with Yemen Blues—a jazz-tinged world music outfit with an Afro-Arabian mindset that brings together musicians from Israel, Uruguay and the United States. Borochov's own music, while running across some similar lines, shows a clearer focus on the shared characteristics of jazz language(s) and Middle Eastern dialects.

Borochov's expressive horn delivers an outpouring of emotions throughout this album, creating intense mood music that sings, sighs, and cries. His front line partner—alto saxophonist Hagai Amir—is cut from the same cloth. Both men seem to believe that feeling(s) should trump technique, though neither one is lacking in either department. Together, they front a piano-less quartet that delivers rhythmically rich and melodically focused music. Some pieces speak of sadness and sympathy ("Pain Song") while others excite ("Samsara"), but all of the music is transmitted with sincerity.

If the music is wanting for anything, it's greater implied harmonic movement. While a lack of a chordal instrument could really open things up, stasis and vamp-based allure surrounds much of this work, with bassist Avri Borochov playing the straight man for long stretches; this particular issue, however, doesn't dampen the spirit of the music. Tension-and-release strategies, twisting lines, writhing calls, and group interplay keep things interesting if/when a harmonic rut appears. On the whole, Outset is a fine first step for a trumpeter who's well on his way in the music world.