By ANTHONY SHAW
September 29, 2006
Sign in to view read count 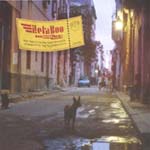 Zetaboo started in the early 1990s when all four original members were students in Helsinki. Maybe the title of this, their third album, reflects the distant orbits that their individual careers have taken since the 2000 release of MedaZine.

This band has managed to contrive a unique blend of styles which combines their classically inclined instrumentality and strong sense of tone colour with experimentation—electronic, rhythmic, vocal and now acoustic. Their diversity is also reflected in the interests that all four members have maintained throughout their careers. Apart from stints in the classroom, all have played active roles in a number of extremely disparate projects. These range from a Finnish production of Adiemus, involving vocal star and accordionist Anna-Mari Kähärä, to an off-the-wall solo album of totally guitar-originated studio sound and fury by Jarmo Saari, and two bass-driven, essentially acoustic collections from Pekka Lehti.

Released on the Lehti's own, modern Finnish folk-oriented Aitorecords label, this recording is the inspiration of their guitarist. On the breakup of the well-received proto-progressive project XL, Saari has followed the stated interests of his original band members in South American textures and styles, travelling particularly in Cuba and Brazil. The resulting collection features twelve compositions originating from his demos, but honed by the Zetaboo Method (intensive interaction, practice and collaboration). The album showcases all the players' different strengths—strong contrapuntal rhythms, delicate electronics, the inclusion of field samples, exploration of vocal colouring, and now acoustic instrumentalization—Latin, Finnish and much in between.

The first four tracks are a mix of just such ethnic input and instrumental exploration. Then a new feature is introduced, the first of two William Blake poems ("The Fly" and "A Spirit") sung by the sometimes sultry, always expressive Kähärä. Then it's straight back to the sweaty back streets of Havanna, where Saari spent time with his newly acquired cavaquinho in "Hotel Telegrafo," before boarding the album's defining track, an adventurous overnighter "InterRail." Here we meet guest David Wilczewski's raw clarinet and saxophones, Kähärä's wailing accordion and some sublime slide guitar, all at times in harmony and at others confrontational, as we trundle up country to a hiccuping salsa rhythm from Timonen.

This is an album of wonderfully textured pieces, experimental structures and arrangements, but above all a strong and essentially straightforward musical adventure between two continents.