By PATRICK BURNETTE
September 28, 2018
Sign in to view read count 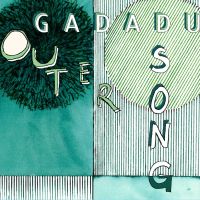 Look at the personnel for Brooklyn-based group Gadadu and you might be misled into thinking it's a jazz-based outfit—two (count 'em) horn players listed as full members and not an electric guitar in sight. But Gadadu (which sounds a little bit like a martial art for babies) is, at heart, a pop group, albeit one fond of long, winding songs that morph several times in their four to seven minute running-times. Hannah Selin's dreamy, floaty, multi-tracked vocals are the center of attention, and, though they make way for solos from keyboardist Nicki Adams and trumpeter Pat Adams, the sound field is too full and burbling for the instrumentalist's elaborations to focus one's attention. And that's ok—both are competent players, but neither is going to set the world on fire.

In short, the group is much more reminiscent of Stereolab (Selin's voice and melody lines definitely evoke Lætitia Sadier) than more openly jazz-affiliated groups like Steely Dan. Outer Song is all about lush, sometimes busy arrangements, rising chord progressions, and lyrics so oblique they're more about enhancing your mood than communicating. ("A speckled world, droughted thirsty for her rain/Married not to my disdain" certainly works better as sound than sense.) Don't worry— the production surrounds Selin with so many layers that it's hard to make out what she's saying anyway.

The good news is that if you're willing to submit to the dream-pop spell, Gadadu's melodies are memorable and their arrangements pleasingly seductive. The songs change gears often, but though the transitions are occasionally a bit abrupt, momentum carries the day and the listener slips down the sound-stream untroubled by the band's more baroque impulses. All in all, Outer Song is an extremely likeable album—Gadadu knows what it's trying to do and gets ninety-percent of the way there. (Clearer production would help—things get a bit muffled when the layers pile up.) If you're ready for a bit of uplift and melody in your life, and like the idea of acoustic instruments doing much of the heavy up-lifting, you'll likely enjoy Gadadu's Outer Song. It's in frequent rotation 'round these parts, despite the cavils above.