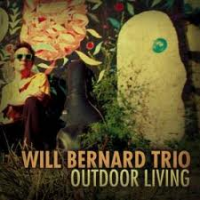 As if capturing the Will Bernard Trio caught up in a rush of inspiration, both the initial and concluding pairs of tracks on Outdoor Living are sequenced together without breaks between. It's an appropriate production touch for an album on which the participants are clearly feeding on each others' ideas and building on the individual and collective talent on hand. The initial segue to "Morgan Deux" from "Nature Walk" is a springboard for the musicians and listeners alike to become caught up in the spirit of the moment, while "Implitude" completes the album with a flourish as it follows "Katskan."

The Bernard Trio functions in an altogether remarkable way: any of the three, at any given time, can assume prominence in such an authoritative way that he seems like the leader of the group. Take drummer Simon Lott, for instance. The New Orleans-based drummer has played with Charlie Hunter among others, and his ability to play around the basic rhythm of a tune like "6B" (suggesting all manner of polyrhythms intrinsic to that beat) makes his kit a natural to take over as the lead instrument. He never overshadows his comrades, though. In this instance, guitarist Bernard creates a variety of syncopations, while keyboardist Blades weaves in and out of the sounds of the other two.

Akin to the ability to fluently speak many languages, Bernard has the uncanny ability to siphon selected characteristics from a given style to suit his purposes. The use of a slide, for instance, allows him to impart the visceral grind of blues guitar to "Nooksack," his confidence and natural affection for the music allowing Bernard to avoid superficiality. The twists he injects into "Roaming Charges" with his creative fretwork are a natural extension of his skill as a composer; he builds the momentum of the performance so that the drama is palpable.

As evidenced by Blades' quietly insistent role on "Point Blank," the keyboardist glues this group together with the grand flow of his Hammond B3. The instrument could fill the crevices in the trio's sound by its very nature, but Bernard's longtime collaborator assertively takes charge, navigating through the arrangements in such a way as to make the trio sound larger than the sum of its three parts. His staccato attack on "Squeaky Chug Chug," gentle as it is, only adds to the assortment of colors and textures on Outdoor Living and, by extension, to the trio as a whole. Blades' playing mirrors the sonic diversity Bernard supplies, and the ingenious relish with which Lott explores his whole kit.

Blessed with consummate finesse and sounding skilled beyond their years, the Will Bernard Trio retains the traditional virtues of this classic instrumental lineup on Outdoor Living through a collective attitude that is wholly contemporary.