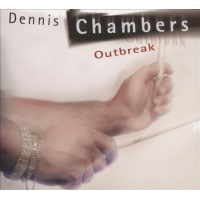 Dennis Chambers, the reigning master of all beats funky, presents a panorama of groove stylings in the vein of Les McCann and the Headhunters. In fact, this session initially feels similar in spirit to labelmate Bill Evans' recent Big Fun, which featured McCann himself. But in the big picture the two releases have little in common besides Randy Brecker and a deep, abiding love of the funk.

Chambers is certainly at home in this territory; so much so, in fact, that he settles into the pocket a bit more snugly than some fans might wish. On several tracks he evinces little of the creative spark that ignites a project like Niacin, opting instead for pretty stock pounding on tracks like "Groovus Interruptus" and "Plan B." The solo orders also become predictable; if a track has a horn player on hand, especially a Brecker Brother, expect an improvisation from him. Just don't expect much solo time from the leader or you'll be let down.

Not that everything on Outbreak is formulaic, not by a long shot. Gary Willis is a breath of fresh air, particularly his wild, doinky sounds on "Baltimore, DC" and his infectiously burbling "Otay" intro. Jim Beard's keys are the real catalyst behind many tracks, and his "Roll Call" is one of the best selections. Bobby Malach's bass sax is a surprise on the closing James Brown tune, as is the humorous, choppy solo by John Scofield that follows. Chambers himself is in best form on "Otay," the slow and gripping "Paris On Mine," and Sly Stone's "In Time." Though it often seems the bandleader's spotlight has been commandeered by the sidemen, Chambers and friends have still turned in a highly entertaining show that's worth the price.