Gebhard Ullmann: Out To Lunch

By BUDD KOPMAN
September 19, 2007
Sign in to view read count 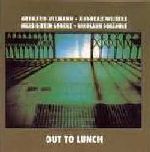 The intense and quite strong Out To Lunch is just about the earliest recording available on which multi-reedman Gebhard Ullmann is the leader, with his discography listing the LP, Playful (Biber, 1985), a duo with guitarist Andreas Willers.

That this release almost shares its title with the acclaimed Eric Dolphy album Out To Lunch! (Blue Note, 1964) is an indication of Ullmann's fondness for the album in particular and Dolphy in general. Musically the relationship to the earlier release is not clear, since the instrumentation is different (vibes, trumpet, bass and drums compared to Dolphy's bass clarinet, flute and alto saxophone), and the vibe here is cool rather than hot. However, Ullmann most definitely connects with Dolphy's attitude and clarity of purpose.

The atmosphere created by Ullmann, Willers, bassist Hans-Dieter Lorenz and drummer Nikolaus Schäuble is one of darkness and mystery, smoky and a bit dangerous. The band is very tight and the rather open tracks straddle the divide between pure improvisations and structured compositions.

Ullmann and Willers both contribute three tunes, and two ("No way" and "Crawler") are credited to the group, but feel more structured than free as is usually the case when the entire group gets credit.

The first tune, "Minus one," by Ullmann is essentially a blues with some harmonic extensions, and sets the stage for the album's mood of late night and cigarette smoke. Quite sexy and yet understated, the track introduces us to early Ullmann and Willers as they play inside and outside the expected.

"Concentration reiterates the connection to the tradition by sounding almost "normal" at times in the phrasing of sax and guitar and the rhythm set up by the walking (although electric) bass and drums. Its A-B-A structure of thematic introduction, solos and recap reinforces the sense of familiarity, which, however, is occasionally unsettled by some extended harmony.

"Feels," "No rags" and "No dinner" are all on the funky side with bluesy overtones. The bass lines are slinky and the themes sneak in and out of the harmonic structure, keeping the listener off balance. The music has a floating quality despite its rhythm due to the open-ended structures and dynamics used.

"No way" and particularly "Crawler," (the group compositions), are the darkest, most intense and complex tracks on the record, being much musical stories than improvised themes. Ullmann and Willers are particularly fine as the former plays long, twisting lines that end up wailing at the sky, while the latter answers with free, spacious and unpredictable solos.

Out To Lunch is the first appearance of what was to be the long-term partnership between Ullmann, Willers and Schäuble in his early years. The music is quite exciting and fascinating as it balances between the past and the future.

Minus one; No way; Crawler; Concentration; Feels; No rags; No dinner; Kaspar Hauser.