Ran Blake / Christine Correa: Out of the Shadows 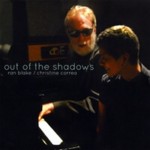 The spectacular second coupling of pianist Ran Blake and vocalist Christine Correa, Out of the Shadows is one of the most extraordinary albums of 2010. Both are wonderful storytellers in their own right. Music appears to flow and gush and foam through Blake's body, breaking in waves from his hands and fingertips as they flutter and fly and splash across the keyboard of the piano. As this happens, each note and phrase and metaphor tells a story like a film of life unravelling, reel after reel. The work of Federico Fellini comes immediately to mind. Like that other master, Blake utters notes that can weep and laugh. His music is always heartfelt and he is a master of placing sound and silence in their rightful places. He is a classicist, a Greek, when it comes to describing the pathos of the human condition in song.

The Bombay-born, New York based, Correa is cut from the same cloth as Abbey Lincoln and Sheila Jordan. Like those timeless griots her voice bends to her will. Correa is completely composed at all times. She has complete control over her vocal chords. And because her style is so singular—so ancient, yet so modern—she seems to narrate epic stories as she treads through the fabric of the songs. The characters are brought to life, laugh and cry and quiver with the delight of just being alive. Often Correa does not so much sing her songs as she "cries" them. Sometimes, in a rapid succession of quarter tones she can make the earth around her rise up and sing.

Music like that which tumbles out of this album comes once in a lifetime. It is when body and spirit are perfectly aligned and instruments—both piano and voice—become so completely subservient to the spirit. On "Social Call" everything, voice, story, piano and song come together in a continuum that is impossible to replicate. The same goes for "Hi Lili Hi Lo." Correa becomes the song on the traditional Sephardic anthem "Una Matica De Ruda" as she sallies forth wordlessly, bending and twisting notes at will. On two anthems from the early days of Max Roach and Abbey Lincoln, "When Malindy Sings" and "Mendacity," Correa is sublime. She makes both tracks her own and this is some feat as no one but Lincoln and Roach are associated with both songs—the former from Lincoln's Straight Ahead album (Candid, 1961) and the latter track from the classic Roach recording of Percussion Bitter Sweet (Impulse, 1961).

There are tracks that make this union of souls quite unforgettable. Ironically both are solo efforts. The first, "This Will All Seem Funny" features Ran Blake alone and the other a revisit to "Out of the Shadows," this time with Correa on her own. Remarkably, these solo outings that close out this memorable set serve to accentuate the qualities that each artist brings to the session: intensity, singular purpose and unqualified dedication to the art of music.

Out of the Shadows; The Thrill is Gone; Deep Song; The Band Played On/Goodbye Little Yellow Bird; Fine and Dandy; Una Matica De Ruda; Goodbye; When Malindy Sings; Mendacity; Social Call; Hi Lili Hi Lo; The Bad and the Beautiful; This Will All Seem Funny; Out of the Shadows.