Billy Strayhorn: Out Of The Shadows 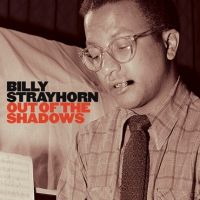 An elaborate box set from the Danish Storyville label: seven CDs and one DVD, paying tribute to Duke Ellington's arranger and composer Billy Strayhorn that—alas—doesn't quite live up to the ambitions of it's makers.

Ask yourself, was Strayhorn truly the shadowy figure implied by the title?

While the bulk of his work was achieved out of the public eye, Billy Strayhorn was no shrinking violet. He "subbed" for Ellington on piano with the band and played on record dates with various constellations of Ellington sidemen throughout the 1950s, most prominently as leader of the septet that in 1959 recorded "Cue For Saxophone" for British Decca (Cue being a pseudonym and contractual get-out for Johnny Hodges).

Two pictures of him adorn the cover of the Ellington band's take on The Nutcracker Suite (Phillips, 1960) on which he was given equal billing with Ellington and Tchaikovsky. During his all-too-short lifetime, Billy Strayhorn was actually one the best known composers and arrangers in jazz.

Following his death in 1967, aged 52, any shadows that might have gathered around the man's musical abilities were dispelled by Riverside's 1984 release, Great Times!, an album of Ellington/Strayhorn piano duets, recorded by Duke's son Mercer Ellington and critic Leonard Feather in the 1950s. Today Strayhorn's fame continues to grow, with videos galore posted on YouTube, including one of him playing and singing his composition "Lush Life" (attached).

If anything, it's this set that—perhaps to prove its own point?—relegates Strayhorn to the shadows.

He plays only on the first of the CDs, accompanying bizarre wordless vocals in Paris in 1961 during the making of the film "Paris Blues" and in six duets with the boss, taken from the recordings made by Feather and Mercer Ellington.

He then makes a belated appearance on the DVD in footage from a concert in Copenhagen in 1965, joining the Ellington band on piano for his most famous composition, "Take The A Train," only to be upstaged by Paul Gonsalves, sound asleep over his saxophone; the drink and drugs obviously catching up with him.

The second CD, "Duke Ellington & His Orchestra Play Billy Strayhorn Compositions," jars somewhat, in that the tracks are all taken from radio transcripts. An embarrassingly "hip" MC can be heard introducing "Kissin' Bug," which Strayhorn wrote in collaboration with trumpeter Rex Stewart and vocalist Joya Sherrill, "If this next one doesn't send you out of this world, brother you just ain't born."

Is the object of the exercise simply to recycle the Duke Ellington Treasury Show recordings, which Storyville is committed to releasing in their entirety?

One way or the other, "Out Of The Shadows" is flawed. As "Take The A Train" comes round for the eighth time, even the most dedicated Strayhorn fan might doubt the wisdom of having climbed so eagerly aboard. Less would definitely have been more.

Still, the package has its moments, and some of them quite glorious. The seventh CD, taken from New York-based saxophonist Harry Allen's two-volume A Celebration Of Billy Strayhorn's Music on Jazzology, is an absolute revelation. Allen blows the dust off 14 Strayhorn numbers, propelling them into the present moment with his incisive, melodic playing. Then there's the interplay between Clark Terry (trumpet) and bassist Jimmy Woode, which turns "Satin Doll" on the DVD into a wonderful—often very funny—jazz romp.

Highs such as these are offset by the pallid, academic fodder of CD4, "The Dutch Jazz Orchestra Plays Billy Strayhorn," in which Strayhorn compositions are played note for note and shorn of Ellington's revisions.

CD1, "Billy Strayhorn, The Pianist & Composer," reveals a classically trained musician very much influenced by Ellington but with a lighter, more refined touch. There are interesting, genteel versions of "Take The A Train," "Lush Life" and the rather creepy "Strange Feeling."

The Paris String Quartet plays on "Take The A Train" and "A Flower Is A Lovesome Thing" and those weird vocals by the Paris Blue Notes creep in on "Lush Life," "Day Dream" and "Multi Colored Blue."

The second CD, "Duke Ellington & His Orchestra Play Billy Strayhorn Compositions," comprises—as noted—re-hashes from the Treasury Shows broadcasts. Al Hibbler's vocal on "My Little Brown Book," positively drips with sentimentality. It's difficult to credit that it's the same song John Coltrane turned into a masterpiece.

"Something To Live For," was the first Strayhorn number to be recorded by the Ellington band and "Johnny Come Lately," the first song he wrote for Hodges. "Take The A Train" boasts a relatively rare tenor solo by Jimmy Hamilton and high note work by Al Killian on trumpet that presages the coming of Cat Anderson but it's a great "out-tro" by Harry Carney that steals the show.

CD4 is the one by The Dutch Jazz Orchestra. The opener, "Everything Is Copasetic" was written by Strayhorn for a fund-raising concert by a group of tap-dancers called The Copasetics that he was involved with.

"Hip," "Blue House" and "Hipper-Bug" are thought to have been featured by the Ellington band at dance dates but never, for some reason, recorded. "Flame Indigo" was written for Ellington's revue "Jump For Joy." "Tiffany" and "Lozit" (Tizol spelled backwards) were unknown until unearthed from the Ellington archives by Walter de Leur, author of "Something To Live For," a book about Strayhorn's music.

CD5: "Billy Strayhorn Played By Scandinavians" (another snappy title!) is more fun than the Dutch offering. The first seven tracks feature Sweden's Rolf Ericson, who played with both the Ellington and Basie bands, on trumpet, and the next three that dependable ex-pat American Bob Rockwell on tenor. "Three And Six," is by the Stan Getz-influenced Swedish tenor player Erik Nordström.

CD7 boasts the snappiest title of the entire set: "Billy Strayhorn Played By Harry Allen, Chris Flory, Keith Ingham, Dennis Irwin, Chuck Riggs." And it's a great listening experience too. With this one, the chains of the past fall away and Ellington and Strayhorn's work breaks through to shine as brightly as if it were written yesterday. Allen converts "The Kissin' Bug" from mediocre pop song into—well—something else, man. If it doesn't send you out of this world, brother you just ain't born. Now where's that MC when he's needed?