Suzanne Pittson: Out of the Hub: The Music of Freddie Hubbard 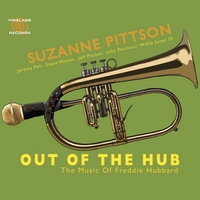 The vocalese and scatting tradition is alive and well in singer Suzanne Pittson. With Out of the Hub: The Music of Freddie Hubbard, Pittson continues to establish herself as one of the best singers on today's jazz scene.

Out of the Hub includes tunes written by or associated with trumpet legend Freddie Hubbard, with Pittson writing or co-writing five lyrics, which Hubbard approved just three months before his passing in 2008.

To honor Hubbard, Pittson recruited a group of extraordinaire musicians, including trumpeter Jeremy Pelt and bassist John Patitucci, who add—along with saxophonist Steve Wilson and the rest of Pittson's quintet—dazzling improvisations throughout.

More than just a singer, Suzanne Pittson is a jazz musician. With a fluid phrasing and stunning tone, Pittson use her voice as another instrument, improvising and playing with the melodies. Pittson's striking sense of melody and amazing vocal range allow her to express a vast palette of colors and textures on swinging tracks like "True Vision," "You're My Everything" and "We're Having a Crisis," and on ballads including "Bright Sun," Moment to Moment" and "Betcha by Golly, Wow!" Following in the steps of the great Ella Fitzgerald, Pittson is also a master of the scatting technique, as shown on "Our Own" and "Out of the Hub."

All the arrangements are by pianist/husband Jeff Pittson, and the cover design is a creation of their son Evan, who also wrote the lyrics to "Out of the Hub."

Our Own (Gibraltar); Up Jumped Spring; Out of the Hub (One of Another Kind); Bright Sun (Lament for Booker); True Visions (True Colors); You're My Everything; We're Having a Crisis; Moment to Moment; Lost and Found (The Melting Pot); Like a Byrd; Betcha by Golly, Wow!

Title: Out of the Hub: The Music of Freddie Hubbard | Year Released: 2011 | Record Label: Vineland