Dave Peck: Out of Seattle

By JIM WILKE
September 3, 2002
Sign in to view read count 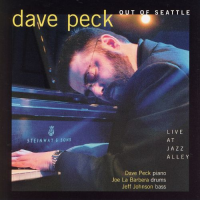 Dave Peck’s fourth CD Out of Seattle represents a slight shift in his approach. After two well-received trio albums ( Trio, 1998; 3 and 1, 2000) with longtime associates Chuck Deardorf and Dean Hodges, Peck chose to record this time with Jeff Johnson on bass and Joe LaBarbera on drums – to “kick me into a different space,” he said. Nothing wrong with that, as Jeff and Joe are two of the best players in the kind of music Dave Peck plays. An additional “kick” in this case is the fact it’s his first live recording – made at Jazz Alley last August.

I think of Dave Peck as a very cerebral player. I suspect he plays tunes in his mind at least as often as he’s at the piano, but there’s also a quietly intense passion in his playing. Take the opening track for instance. It opens with three minutes of an out-of-tempo poetic Chopin-like nocturne that provides little hint of what’s to follow. Fragments of a reharmonized Miles Davis tune are revealed as figures in a mist. In the last few bars before the bass and drums enter, he indicates the tempo of the tune – “Solar” – and when they swing into it, the intensity builds surprisingly and quickly. Jeff Johnson takes one of his “free” solos, and former Bill Evans drummer Joe LaBarbera gets in some exchanges with sticks. Most of the six standards on this CD begin in similarly oblique fashion with solo piano leading to the melody. Bernstein’s “Lonely Town” is a special gem to be savored. Other tunes include “Come Rain or Come Shine,” “You and the Night and the Music,” “I Loves You Porgy,” and “With a Song In My Heart.”

All three players are models of taste and restraint, but their playing goes far beyond merely pleasant. Like widely appreciated art, it can be enjoyed on many levels depending upon what you bring to the experience. You’ll find both art and craft, wrapped in an appealing package.