Jared Gold: Out Of Line

By DAN BILAWSKY
September 16, 2010
Sign in to view read count 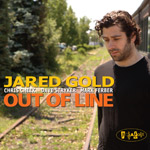 Despite the implications that live within a title like Out Of Line, organist Jared Gold's third Posi-Tone release is rather in tune with the history and vibe of organ groups and all that goes with them. Gold is joined by some top notch east coast talent, in the form of guitarist Dave Stryker, drummer Mark Ferber and saxophonist Chris Cheek, and all four musicians seem to gel well from the very start. Gold might have eclectic tastes, with covers ranging from Hank Mobley's "An Aperitif" to Stevie Wonder's "You Haven't Done Nothin,'" but he covers nearly every style in the organ group playbook as he works his way through this nine-song program.

The Mobley tune, originally on the saxophonist's lesser-known Third Season (Blue Note, 1967), starts things off with a bang. Gold and Cheek are as tight as can be, as they work their way through the head on this up-tempo number. Funk is a healthy part of any organ group's diet and Gold delivers the goods with "The Stone Age" and "You Haven't Done Nothin,'" the Wonder tune coming across as a looser, riff-based workout, while Gold's original is a bit more substantial. Cheek leads the charge, while the rhythm section has some greasy groove-making going on beneath him; the overall sound like a less aggressive version of Joshua Redman's Elastic Band.

"Preachin'" is a superb gospel-soul number which highlights Gold's playing and writing, while "It Is Well" is churchy in a different, more reverent manner. This understated number sounds like a jazz take on a hymn, and it shows off a different side of Gold's personality. While Ferber's drums hint at bossa nova on the title track, nothing else on the disc really speaks of Brazil.

A soothing take on The Delfonics' "La-La (Means I Love You)," and an odd-metered arrangement of "Skylark" close the album. Gold's performance of The Delfonics' megahit reflects the understated quality of their rendition; "Skylark," on the other hand, is reshaped and molded to Gold's liking. Cheek and Gold are both in fine form on this one, and Ferber even gets to solo over an energized vamp, as the album draws to a close.

An Aperitif; Preachin'; Out Of Line; You Haven't Done Nothin'; It Is Well; Down South; The Stone Age; La-La (Means I Love You); Skylark.