By C. MICHAEL BAILEY
October 23, 2015
Sign in to view read count
Track review of "Dark was the Night, Cold was the Ground" 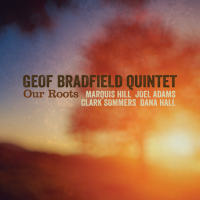 Tenor saxophonist Geof Bradfield's inspiration for Our Roots came from Clifford Jordan's Huddie "LeadBelly" tribute, These are my Roots: Clifford Jordan plays Leadbelly (Atlantic, 1965). While there is a bit of overlap in material from both recordings, Bradfield adopts a very different format for his presentation. Jordan employed a standard jazz rhythm section, while Bradfield eschews a harmony instrument in preference to a three-horn front. It is no mistake that this recording recalls alto saxophonist Ornette Coleman's seminal Atlantic recordings of his famous pianoless quartet. As evidenced in Coleman's "Lonely Woman" his vision was steeped in the Texas blues of his youth. It is exactly this spirit Bradfield channels on the present Our roots.

However, Bradfield wanders beyond Jordan, including two Blind Willie Johnson compositions, including his most famous one, "Dark was the Night, Cold was the Ground." Ethereal rising off of a 90-year old shellac 78 RPM, this Johnson composition was sent out on the Voyager Golden Record, sharing company with Bach's Brandenburg Concerto No. 2 (first movement), Beethoven's Fifth Symphony (first movement), and Chuck Berry's "Johnny B. Goode." Branfield takes this piece in an entirely different direction. After a brief horn exposition, bassist Clark Sommers and drummer Dana Hall perform an intensely moody duet before Bradfield enters with Johnson's theme. The performance among the horns is one of call-and-response, recalling in modern terms something ancient and fecund.