'Seya' is Sangare's masterpiece, and the apotheosis of roots-based but globally-inclined Malian music 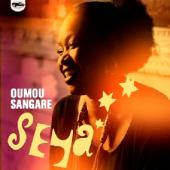 Before European-derived concepts of career management became widespread among African recording artists, following the emergence of the world music movement in the late 1980s and 1990s, a musician's stature could be measured by the frequency of the albums he (or, less often, she) released. The Congolese guitarist and bandleader Franco (1938-89) released a staggering 150 albums during a 35 year recording history which began before the local advent of long-playing records. During the 1970s alone, the Nigerian singer and bandleader Fela Anikulapo Kuti (1938-97)released around 30 albums, most of them in three years mid-decade.

The output of guitarist Ali Farka Toure (1939-2006), a compatriot of the Malian singer Oumou Sangare and since 1989 her label mate on World Circuit, was more modest, but even the 10 albums Toure released between 1989 and 2006 outnumber Sangare's by two to one. Seya is, remarkably, only the singer's fifth album in a recording career stretching back 20 years, to Moussolou (World Circuit, 1989).

With Sangare, it's the quality which is astonishing, not the quantity—and Seya proves to be her masterpiece. It's also the apotheosis to date of roots-based but globally-inclined Malian music: an album which will delight Sangare's domestic audience while reaching out much further afield.

In many ways, Sangare's music is the flip-side of Toure's, who played a ragged and jagged, spookily Delta-like style that wasn't called "desert blues" for nothing. Like Toure's, Sangare's lyrics address deep and, within traditional Malian society, often controversial issues, but the ambiance she creates is, in the main, joyous and celebratory. In this respect, Seya is more closely aligned to the work of husband and wife duo Amadou and Mariam, whose lushly produced Dimanche A Bamako (Nonesuch, 2005) and Welcome To Mali (Nonesuch, 2008) have forged a sophisticated and musicianly, but essentially "pop," Malian genre, one whose enjoyment requires no prior knowledge of its sources. Indeed, the title track on Seya—which translates as "joy"—inhabits a groove as universal as any of Amadou and Mariam's mellifluous confections. (Check the YouTube clip below for a taste).

If "Seya" is the most radio-friendly track on the album, the other 10 aren't far behind. Production values have been high on all Sangare's albums, but never before have ngonis (lutes), balafons (marimbas) and traditional drums and percussion—the pulsing, riffing, cross-rhythmic bedrock of her sound and the foundation of all her arrangements—been recorded in such sumptuous splendour, boldly eschewing the literalist "field recording" aesthetic with which they are usually approached. The instruments' unique textures and resonances have been brilliantly captured and sympathetically enhanced, and arranged to create a thick, rich tapestry of sound over which Sangare's vocals—precisely locked on to the rise and fall of each tune's rhythmic emphases, rocking back and forth in call and response with the supporting vocalists—create just short of an hour's glorious auditory mesmerism.

The ngoni player "Benogo" Behima Diakite, who has accompanied Sangare throughout her career, remains her most important instrumental foil. There are numerous guest musicians, most of them specialists on traditional Malian instruments, but also including guitarists, saxophonists, violinists, flautists and, on two tracks, co-producer Cheick Tidiane Seck's Hammond organ. The Hammond is the only keyboard to be heard on an almost entirely sample-free production (only the shimmering notes which open "Djigui" suggest otherwise). The European instruments are generally played with a West African sensibility: Harouna Barry's saxophone on "Wele Wele Wintou," for example, has a Senegambian identity closer to Orchestra Baobab than Memphis or 52nd Street. The occasional "alien" presence, most memorably the oriental-sounding violin motif played by Anthony Leung on "Iyo Djeli," is woven harmoniously into the Malian groove. Flutes, a feature of Sangare's music since she formed her first band (a trio) in the late 1980s, are heard on five tracks, and are usually heavily vocalized.

A triumph of Seya is that it is simultaneously modern and rich in historical contextualisation. Co-produced by Sangare, Seck and World Circuit's Nick Gold, the album sets a new benchmark in Malian music. It comes in a beautifully designed package which includes translations of Sangare's lyrics into both English and French, augmented but not overburdened by explanatory footnotes (Malian songwriting is rich in locally-derived metaphor and allusion). In all respects, Seya is perfection.