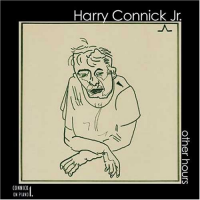 You might not recognize this side of Harry Conninck Jr. The entertainer and vocalist is more associated with "Old Blue Eyes" (Frank Sinatra) than Monk. He is renowned for his skill as a vocalist, but his passion for jazz piano and writing music has recently garnered him more attention in theatre and other venues. The fact that Connick is a serious jazz pianist and this is his first jazz quartet recording may come as a surprise, but the music speaks for itself.

Other Hours consists of music written for the 2001 Broadway musical Thou Shalt Not, which was nominated for a Tony Award. In collaboration with Susan Stroman and David Thompson, Connick wrote the score as a backdrop of post-War World II New Orleans in novelist Emile Zola's classic 1869 story Theresa Raquin. "While situations in the play provided the basis for the lyrics, I liked the melodies so much that I also wrote with the intention of performing each tune as a stand-alone song," says Connick.

Jazz is about transitions and the transition of Other Hours from theatre to jazz quartet works well. No background is needed to enjoy and soak in engaging, entertaining music with a serious swing factor. Connick has honed his piano skills with esteemed teachers such as Ellis Marsalis, and it shows on the composition "Oh Ain't that Sweet," which combines a quirky melody which opens into full modern bop. Harry's solos are interesting and probing, while his comping skills add meat to the bones on the cool title "The Other Hours."

The key to any tight group is both the music and the musicians. Connick's choice of players makes the transition a reality. Saxophonist Charles Ned Goold brings a nice compliment to Connick's lyrical style. With vibrancy and depth, his reedy tenor voice along with Connick's innate sense of melody is humbly reminiscent of the great Thelonious Monk collaborations with tenor saxophonist Charlie Rouse. The rhythm section of Neal Caine on bass and Arthur Latin is impeccable on the upbeat opener "What A Waste" where Latin displays drum fireworks, or the cool modal "Such Love" where Caine adds staunch bass lines along with a memorable solo. For those expecting another vocal recording by Harry Connick Jr. Other Hours may be a departure, but in the realm of swing and style, it's a pleasant one.