By TROY DOSTERT
February 7, 2018
Sign in to view read count 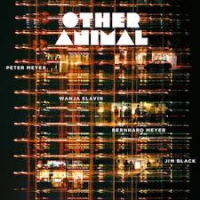 Peter and Bernhard Meyer, two-thirds of the German combo Melt Trio, decided to join forces with a couple new colleagues for a fresh take on their trademark blend of rock and jazz grooves, or what they call "alternative prog-jazz." Guitarist Peter and bassist Bernhard usually partner with drummer Moritz Baumgärtner, but Other Animal features Jim Black on the kit, and he shares Baumgärtner's fluid stylistic range. Both drummers excel at breaking free of idiomatic confines, lending a certain anything-goes aspect to their playing, something neither fully jazz, pop, or prog, but merging elements of all three. What truly gives this group a new dimension is multi-instrumentalist Wanja Slavin, whose work on alto sax, flute, clarinet and synthesizers opens up new melodic possibilities while at the same time freeing Peter Meyer to lend additional texture and rhythmic grit to the music. Like Black, Slavin is also a multi-genre instrumentalist, and his recent album with Amok Amor (joined by Christian Lillinger, Petter Eldh and Peter Evans), We Know Not What We Do (Intakt), was one of last year's more intriguing offerings.

The twelve compositions on Other Animal are split between the brothers, with Peter penning seven and Bernhard the remaining five. Most seem to be new, with the notable exception of "Stroy," an infectious tune which first made an appearance on the Melt Trio's 2016 record of the same name (also on Traumton). This version illustrates the way Slavin augments the music, with his sweet articulation of the melody giving the piece additional lyrical power. Like "Stroy," many of the other tracks possess the group's characteristic approach, with sinuous melodies that are eminently accessible, but which are given just the right amount of unpredictability through the band's rhythmic diversity and strong emotional arcs. Even the opener, "Drown Dreams," despite staying locked onto a gentle straight-rock beat, holds interest through the piece's catchy hook and a soaring solo from Slavin. "Mr. Manga" ratchets up the power considerably, by contrast, with a more tenacious odd-meter rhythmic structure and a harder-edged guitar part.

Other tracks are a bit more open-ended, giving the players an opportunity to venture outward in a more impressionistic vein. "Downbear" benefits from a generous helping of atmospheric effects and a rubato tempo that allows Black to offer color commentary instead of a steady groove; and "Spectral," as one would expect given its title, generates a rich mood of mystery and wonder, with another effective departure from the more beat-driven music on the record.

Whether the Meyer brothers continue with Other Animal or it becomes a one-off, the record is certainly engaging, well-played, and a solid addition to their discography.