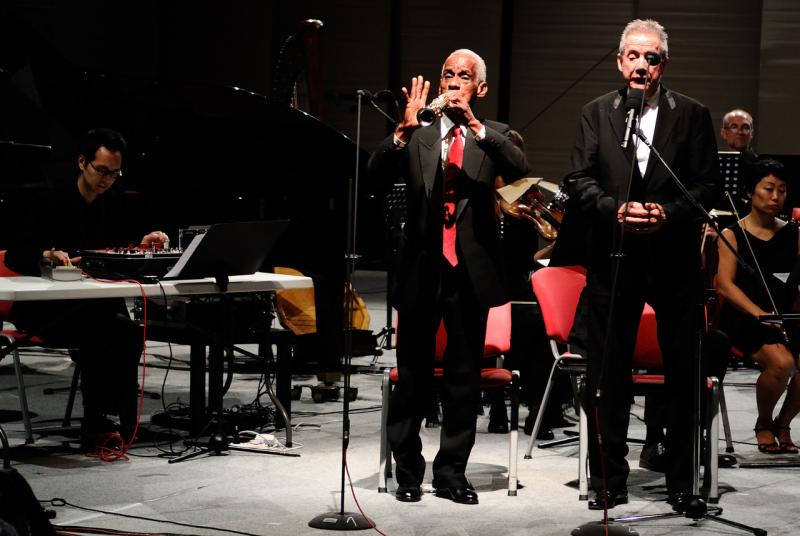 A newer breed of industrially-attuned tourism is evident in the city of Ostrava, in the north-east of the Czech Republic, and very close to Poland's border. One of its biggest attractions is the relatively recently retired coal mining and blast furnace complex, which unusually combined the entire digging, coking and ore-ing activities, all in the same area. Since closing down, it's now preserved as a UNESCO World Heritage site. It was founded in 1843, and retired in 1993.

During visits to this hardcore zone, the ears were confronted with almost as much stimuli as the peepers, which is highly appropriate whilst attending the Ostrava Days festival. This is a biennial affair, spreading across a 10-day period, and mostly featuring two or three concerts on each date, sometimes more, and sometimes less. The thrust of the festival (governed by its guiding force, composer and conductor Petr Kotik) is modern composition, but using the foundation attitudes of composers such as John Cage, Iannis Xenakis, Toru Takemitsu, Morton Feldman and Philip Glass, frequently extending into the realms of improvisation, jazz, electronics, rock, 'noise,' exotica and electroacoustic, now that most younger composers are more likely to have been sprouted in an omnivorous environment.

Had the evening performances sensitised the ears to low rumbles, groans, clangs and distressed scrapings? Or are attendees of Ostrava Days more inclined towards hearing the 'outside' world's surroundings as a cauldron for potential musicality? For the festival's opening gig, on the Thursday evening, the Provoz Hlubina venue happened to be right on the edge of the old industrial zone, another one of these wonderfully converted interiors, all brick, girders and piping, for seducing we iron age fetishists. This makes a difference. In this setting, modern composition could be absorbed in a more casual environment, with flexible seating, cup of beer in hand, offering the opportunity to wander around the walls, seeking out different sonic spaces. Members of Ostravská Banda provided the personnel for various works, your scribe only arriving, unfresh from the airport, in time for the second half of this concert.

As a complete contrast, the evening's second concert was given in the city centre's Saint Wenceslas Church, with the solo viola of Nikolaus Schlierf, playing Boris Guckelsberger's "Requiem," from back in 2001. Lines are amassed with rhythmic strokes, steadily thickening, weaving bass patterns, and adding vivid decorations. There was a pause, as the second phase built up another escalation from scratch, returning to similar levels. Straight away, on this first night, the festival's canny strategy of placing diverse musical types in well-suited environments is revealed.

The second evening returned to Provoz Hlubina, using its various spaces, and beginning with "Cage Chess Show," performed by the Opening Performance Orchestra, with guesting pianist Reinhold Friedl. OPO are an all-laptop foursome, lined up in a row, their manifesto including the call-to-arms of 'no melody-no rhythm-no harmony.' Quadrophonic speakers lend some degree of spatial character, whilst Friedl is not chiefly a pianist, but spends a lot of time sitting at his table, which is littered with close-miked objects. He has glasses of water, with a pair of straws, sipping from each in turn, surely with some sort of adhered microphone on his throat. The Orchestra samples, and he glugs, then strolls over to the piano. An intense low hum pervades, as tentative keyboard shapes appear, and Friedl wanders over to crouch by his metal percussion, opens a packet of pretzels, munching up a forest of molar crunch, then begins playing a game of chess with himself.

Surely Mister Cage himself would have appreciated this theatre, all of it in the name of potent sonic dispersal, against the growing laptop scuzz. Clicks, groans, howling wind, muttering, a metal whistle, and yes (!), a kazoo! Next time Friedl actually visits his piano, he strums inside, then crunches an apple, and deploys either a cheese grater or a pencil sharpener. Cage's voice itself is in the mix too, buried but discernible, and then Friedl shouts out a repeated phrase, his voice sometimes cracking high. This is abstract sound that surprises: it really ain't clear what might happen next, as the intensity grows. Dark, violent piano strikes are made on prepared guts, then Friedl's back at the microphone, resorting to suffocating heavy breathing, with Satanic power. A dark, bloody patch creeps down the video image of chess pieces, being as good as any way to conclude this tense improvisational theatre narrative.

The String Noise duo (violinists Conrad Harris and Pauline Kim Harris) were set to appear at the festival in several contrasting settings, none of them as scabrous as their collective name might suggest. Here, in the upstairs room at Hlubina, they played a set that alternated violin works with electronic pieces by Michal Rataj, the two factions combining at the conclusion. This presentation could have been in two separate parts, but there was a deliberate decision to sit the acoustic and electric sides at close quarters, shaping a setting that possessed unique qualities, each approach affecting the other, in its time-proximity. The speaker system was still only quad, but this still facilitated sufficient movement. "Fuga" (Georg Friedrich Haas) might even have been immediately sampled by Rataj, continuing its swirling around the room, regurgitated promptly as the violins finished. Even if this wasn't so, it sounded like it could have been the case. Some of Rataj's digital materials sound very descended from raw violin matter. Petr Bakla's "September" begins out of an extreme quietness, the barest sonic traceries, then inches up to a hovering mass of tonalities, eventually cycling back to its original sparseness. The concluding Rataj work ("The Long Sentence II") is newly completed in 2017, with bassy undercurrents and gently strafing sawings, pizzicato rompings suggesting a folksy origin, a kind of spring ecstasy rather than an autumnal gloom. Ultimately, though, after much bouncing from speaker-to-speaker, the frosty electronics set in, bringing down a morose pall.

The first Friday featured a substantial run of music, continuing with the veteran New York pianist Joseph Kubera delivering a mostly solo recital. Kubera has been a central figure on the NYC new music scene for at least the last three decades. He gave off the aura of mentally preparing, lurking around as a shadowy presence earlier, drinking in the music that preceded his set. Michael Byron's 2009 "Book Of Horizons" is like a runaway Conlon Nancarrow train tumble, a severe sort of boogie woogie, with dancing, locking, rolling patterns, clipped attacks, trilling scampers and a limping-then-skipping syncopation. Kubera sends fidgety droplets flying, as this ridiculously insistent pace is maintained. Christian Wolff's 1952 "For Piano I" is carefully measured, pausing, with isolated plinks and strikes, in a complete contrast to the preceding piece.

The pianist Muhal Richard Abrams was to have appeared at Ostrava Days, but clearly, by this time, had become too ill to travel and perform. His "Then, Now And Forever" fuses isolated blows with progressing runs, uniting the divergent forms of the previous works, prancing at the high end, emphatic at the low. Violinist Conrad Harris joins Kubera for "Sonata #3," by Lejaren Hiller, from 1970. The piano adopts a highly aggressive persona, and the violin has a flying gypsy quality, with both artists striking glancing blows against each other, Kubera standing up to rumble a low bass line, as Harris makes isolated finger-plicks. Pounding relentlessly, Kubera climaxes by bringing out his big furry mallet, for a resounding finish.

Saturday began with a late afternoon/early evening double bill of good old-fashioned hardcore improvisation, although the gig was billed as a 'mini marathon of electronic music,' which was a tad misleading. Yes, there was amplification, and yes, a laptopper or two, but the pair of large ensembles were employing a broad array of instruments, engaged in improvisations fundamentally descended from the free jazz tradition. The setting was Ostrava's Gallery Of Fine Arts (we've decided not to attempt its Czech name), again utilising different rooms, to allow each band to set up their extensive spreads.

The Prague Improvisers Orchestra are too fucking loud! Your scribe enjoys extreme amplification, and never, ever, inserts aural-condoms, but for the size of the relatively small gallery, and the proximity to the audience, the PIO assault is painfully physical, and possibly not fully intended. Actually, the PIO aren't purely improvising, it seems, as a score leads them for some of the way, perhaps leaving very open spaces for spontaneity. Their line-up includes drums, bass, electric guitar, keyboards, trombone, strings, vocals, zither (or dulcimer), trumpet and baritone saxophone. A too-jokey intoned vocal is answered by instrumental mimicry, and one of the female singers leads a scatting scrabble, with drums, violin, guitar, electronics and baritone saxophone. Then the team lined up along the other wall (this is a way of dividing up the ensemble) respond with their own atmosphere construct, both teams uniting for a sudden finish, as they hit a concise 40 minute mark.

As they started late, this sharp end might have been influenced by the next set's live radio broadcasting. The Kraków Improvisors Orchestra established a completely different mood, keeping events to a subtly environmental slow evolution, led by a governing laptop soundscape. The line-up has paired drums, violins and guitars, bassoon (with pedals), and alto saxophone. The aura must be described as cosmic, with the laptop parts acting as a prompt for sections of increased activity, the procession of sound handled very sensitively. One of the drummers starts working very delicately on cymbals, as a repeating hi-hat egg-fry intensifies, triggering thoughts of The Necks, as a cycling hum increases. Even though this appeared to be almost completely improvised (aside from the laptop guide-contents), it emanated a quality of tightly controlled progression, resulting in an extremely evocative sonic wide-canvas.

Still in the gallery, the String Noise twosome completely inhabited another room upstairs, interpreting Alvin Lucier's "Love Song," a recent piece (composed specifically for them) that involves detailed cross-hatching of percussive, minimalist, steadily sawing string parts, the players slowly moving around, changing their relationship to each other, and the tightly gathered audience.

Sunday saw the Ostrava New Orchestra make its debut, at the Triple Hall Karolina, a flexible performance space in another converted factory building. On this evening, it embraced the large-sized orchestral combinations required for some of the programme, but on subsequent nights, the area could be shrunk, also utilised to welcome a smaller grouping. Combining younger European and American players, the ONO has an 85-strong potential membership, and surely most of these must have been onstage for the world premiere of NYC composer Phill Niblock's "#9.7."