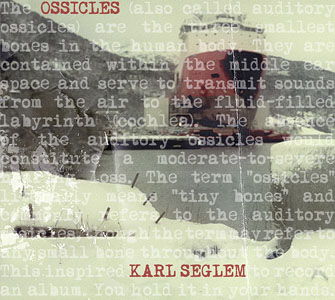 Saxophonist and goat/antelope hornist Karl Seglem has led a long and diverse career, both as a recording artist and as the head of NORCD, a label that reaches across a multitude of musical boundaries looking to be broken, linking them together with a decided focus on the traditional music of his native Norway. Despite an increasingly large and diverse discography as a leader, some of Seglem's relationships actually predate NORCD's creation. The group that released the folkloric-meets-electronica Urbs (NORCD/Ozella Music, 2008), is built on Seglem's longstanding collaboration with Hardanger fiddler Håkon Høgemo—a star in the tightly knit folk community, who grew up only 12 kilometers from where Seglem was raised, though the two didn't actually meet until 1990. With a stable line-up—other than percussionist Erland Dahlen replacing Urbs' Helge Norbakken, Ossicles reflects an inherent collective chemistry that has only strengthened with time.

Høgemo's connection with traditional Norwegian folk music is as deep—perhaps even deeper—than Seglem's; a discrete connection with the past balanced with a contemporary eye on the future by electric bassist Gjermund Silset, and electric guitarist Olav Torget, whose Suburban Juve (Echofisk, 2008) refracted a similar modernity to the folk tradition through a decidedly different prism.

Stylistically related to Urbs, but less processed and more organic, Ossicles reflects Seglem's broadening interest in music from other cultures—in this case the Middle East and deeper into Africa. The haunting, minor-keyed melody of "Gamma rørsle" feels unmistakably Arabic—as does the serpentine, dervish-like theme to "Sognabad"—but gradually opens up, with Torget's shimmering electric guitar and Seglem's combination of goat horn and voice, into something more sonically and stylistically expansive. Dahlen and guest percussionist Kenneth Ekornes propel the piece, alongside Silset's deep, sliding fretless bass, until a sudden dissolve into near-ambient territory; gently ethereal, the only melodic movement coming from Høgemo's minimalist pizzicato.

Seglem handles the lion's share of the writing and it's firmly structured, though he leaves no uncertain space for extrapolation and extemporization. The title track—a duo featuring one of three goat horns employed by Seglem, and Dahlen, who stretches out on drums, saw, log drum, assorted percussion and a triggered bass pattern—is one of Ossicles' most overtly spontaneous tracks. "It still has a lot of overdubs ... but recording the bed tracks live makes a big difference," said Seglem, in a 2010 All About Jazz interview, and there's no doubt that the spontaneous interaction of recording this way gives it a complexion much closer to the group's live performances than on Urbs.

Texturally broad, Torget's mBira (African thumb piano) is a definitive voice on "Marbla," where Høgemo's fiddle creates a surprisingly reggae-like pulse, while his konting (West African ngoni) is strangely redolent of the Mississippi Delta on "The Ornes Song," even as his band mates play in contrary motion. It's all about genre-busting with Seglem and Ossicles, an album that occupies the same continuum as fellow Norwegians like saxophonist Jan Garbarek and traditionalist singer Mari Boine but, with its combination of goat horns, Hardanger fiddles, ethnic percussion and African instruments, breaks down barriers in its own very personal way.