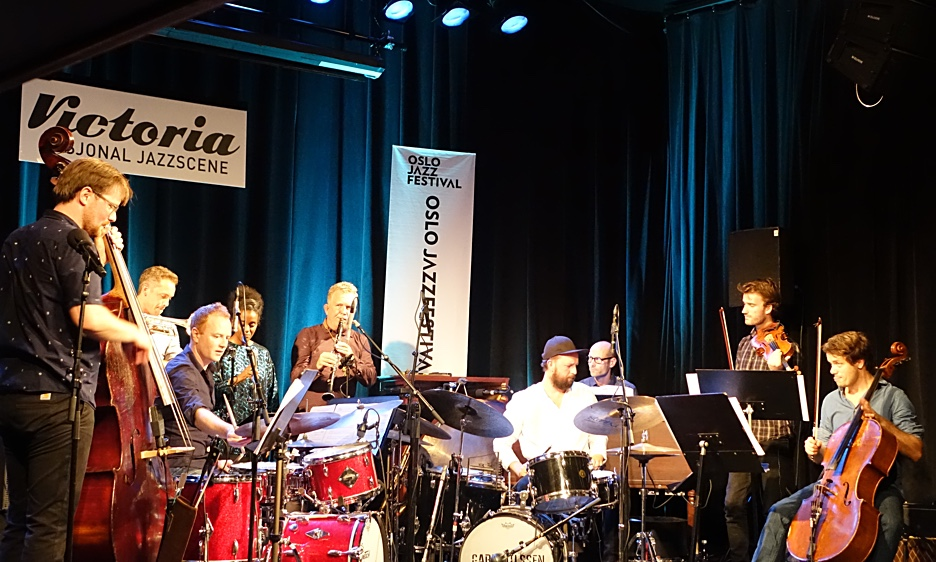 The Norwegian capital Oslo bills itself as a festival city and, with around a thousand concerts each year, claims that it has the most concerts per inhabitant of any city in Europe. Included among those are the 70 plus events which made up the 2018 edition of the Oslo Jazz Festival. I can vouch for the festival's visibility too, as I spied an ad on the train from the airport into the central station, and then found it hard to miss the banners announcing the Festival which bedecked the main drag, Karl Johans Gate, all the way down to the Royal Palace.

Programmed over six days, the Festival line up featured a rich mix of international acts and Norwegian artists. The concerts were distributed among various top notch venues around the city centre, but even allowing for the geography, it was impossible to see everything happening on any one night due to multiple shows starting at the same time. So it was necessary for festival-goers to make some choices. Fortunately there was a lot to choose from.

I was able to attend for three nights towards the end of the week long festivities, which meant that I missed some of the better known acts like Sons of Kemet, the Kenny Barron Trio and the Arturo O'Farrill Quintet who appeared earlier in the week. Nonetheless there was a varied selection of music on offer, which included many names new to me, supplying the potential for discovery: one of the main pleasures of any festival in my book.

It was a real treat to catch the Trondheim Jazz Orchestra in the conducive environment of Nasjonal Jazzscene Victoria. A cross between a large club and a small theater, the prestigious venue nestles incongruously between two burger joints at the slightly more up market end of Oslo's main shopping street. For their concert at this year's OJF, the spotlight fell on bassist and Musical Director Ole Morten Vågan, who lead a talented line up more than capable of handling the diverse demands he placed upon it. One of Norway's most sought-after musicians Vågan has collaborated with names such as Bugge Wesseltoft, Joshua Redman, John Scofield, Terje Rypdal, Maria Kannegaard, Nils Petter Molvaer and Jon Christensen, but also leads his own group Motif, heard to good effect on My Head Is Listening (Clean Feed, 2016).

During the course of the TJO's eighteen years of existence, its reputation as one of the country's most innovative jazz orchestras has spread way beyond the Scandinavian realm, resulting in rewarding partnerships with international stars such as Chick Corea, Pat Metheny and Joshua Redman. The orchestra operates with a pool of high profile alumni, so instrumentation and size change from project to project, giving great width in the repertory.

With Vågan at the helm the 13-strong Orchestra exhibited some of its more left field tendencies in interpreting his adventurous and far ranging charts. That was apparent right from the start where a jerky intricate opening blossomed into the wonderful cacophony of frantic orchestral freeform. Order gradually reasserted itself and the piece opened out for a piano trio section in which Oscar Grönberg at the keys played some repeated Cecil Taylor-like kernels.

Each of the six numbers embraced similar examples of the same sort of trickery. In the second piece, Eivind Lønning's darting trumpet soloed over a stuttering ensemble rhythm. But gradually the orchestra subsided until just Lønning's trumpet and Vågan's bass were left in stark relief, before continuing with jabbing orchestral exclamations sans rhythm section. Such excellent and imaginative arrangements were commonplace, and drew well-directed cries of "bravo" from the audience.

The use of Sofia Jernberg's wordless vocals, buoyant alongside the horns, recalled British pianist Keith Tippett's Ark assemblage, which similarly covered ground from richly arranged written portions to incisive freedom. The sorrowful then slowly soaring third piece served as a vehicle for Swedish reedman Fredrik Ljungkvist, best known from his high-profile tenure with Atomic. His wailing jazzy tenor managed to be both graceful and full of vigor, and then exploratory as he savored a timbral duet with Jernberg. Indicative of the range of styles integrated into any one piece was the shift from orchestral muttering to juddering riffs to two beat bounce and finally a percussion interlude which saw drummers Gard Nilssen and Håkon Mjåset Johansen pounding and facing off, until concluding with a percussive pattern on solely bass.

Vågan deployed small groups and solo features adroitly within the larger ensemble. One piece which began as a ballad with a Caribbean lilt somehow transformed into a scratchy improv section for bass, drums, Adrian Løseth Waade's viola and Øyvind Engen's cello, before moving on in further unanticipated switchbacks. Vågan also took the opportunity to flaunt his avant credentials with an unaccompanied interlude during which he rattled his bow in its sheath, scraped below the bridge, and tapped both strings and body, exploiting on the whole of his instrument for unexpected sonorities. The final number contained a terrific alto saxophone outpouring from Eirik Hegdal during which Ljungkvist and the other horns had great fun organizing pithy interjections.

It was an excellent concert, full of variety, exciting interplay and great soloing, harnessed by unpredictable scores.

An intimate set of originals, standards and less anticipated covers by American pianist Fred Hersch at Nasjonal Jazzscene Victoria constituted one of the highlights of the festival. Hersch currently resides somewhere in the upper echelons of modern jazz pianists, reaping plaudits with both his trio and as a solo artist. Alone on the stage, his renditions often evoked a journey, albeit a deeply personal one subject to minor digressions and sudden shifts in tone, dynamics and time. The opening mash up of two tunes by the Brazilian composer Antonio Carlos Jobim illustrated that perfectly, by turns rippling and rhapsodic.

Hersch seems to subscribe to the Buddhist credo of change and impermanence as nothing appears fixed in the way he endlessly spins through theme and variations, using his divine touch to move between syncopation and lightly swaying passages in different tempos. His originals ranged from "West Virginia Rose" with its Americana-tinged rolling rhythms and the tranquil "Pastorale," which paid homage to his classical beginnings.

In a perhaps inadvertent link to the Festival's opening event, a celebration of the repertoire of folk singer songwriter turned jazz enthusiast Joni Mitchell, Hersch tackled her classic song "Both Sides Now." He dedicated his tender rendition, full of swelling choruses, and tangents of heavy drama and ringing shards, to the recently passed Aretha Franklin, another big influence on the 62-year old pianist. Later on another "song from my youth," he outlined out the framework with his left hand only, before pressing both into service to bring out an unexpected churchy dimension to the Beatles "For No-One."

His versions of standards often began in heavy disguise, as if he had set off without a destination in mind and then happened upon the song during his travels. "Caravan" started off almost funky, but quickly fractured into staccato impulses. At one point his hands walked to the furthest extremes of the Steinway, before regrouping into a bluesy stride, punctuated by a repeatedly struck note. If he didn't telegraph the direction in the openings, then the same was also true of the finishes, often bamboozling the audience with false endings and then taking them by surprise with sudden pull ups. His "Embraceable You" offered a delicate, almost whimsical take on the familiar chestnut.

As always Hersch celebrated Thelonious Monk, capping his set with a couple of tunes. A dramatic flourish gradually revealed the familiar contours of "Round Midnight," before he left the tune way behind in a whirl of repeated phrases, ringing tremolos and barreling excursions, before settling on "In Walked Bud" to close. Unsurprisingly the audience demanded an encore, a wish fulfilled with an elegiac reading of Billy Joel's "And So It Goes," which with hints of "Auld Lang Syne" supplied a suitably affectionate send off.

The grand setting of the main hall in the city's university hosted a special performance by the trio of low brass specialist Daniel Herskedal, with pianist Eyolf Dale and percussionist Helge Norbakken, supplemented by Marinemusikken (the concert band of the Royal Norwegian Navy). Such a collaboration is far from unprecedented for Herskedal, as he often seeks out unconventional combinations for his music, as evidenced by a track record containing outings with a string orchestra on Slow Eastbound Train (Edition Records, 2015), and a choir on Neck Of The Woods (Edition Records, 2012). And given that his new venture Old Salt Legends has a watery theme, joining forces with Marinemusikken, which resembles a cross between a brass band and an orchestra without strings, fits neatly into that pattern.

Herskedal's writing was genre spanning and cinematic in scope, recalling at various times big band charts, Grieg's Peer Gynt Suite and post-bop jazz. On "North West Passage," a percussion tattoo by Norbakken suggested native Indian beats, amid the explosive clatter, which brought to mind gunshots or ice cracking. After a pause Dale, one of the most distinctive soloists, fast becoming a fixture on the country's jazz scene and also associate professor in jazz at the Norwegian Academy of Music, took a richly colored turn full of clipped embellishments and rolling lines, heralding a nimbly swinging trio section.

In an imaginative display Knut Ålefjær, the Marinemusikken lead percussionist and probably the member most attuned to Herskedal's conception, introduced the next number with flurries which terminated with something akin to natural decay. Herskedal lead the line on bass trumpet, and the band responded to his call before the piece took in an Oriental tinge. Here and elsewhere Herskedal revealed himself to be a virtuoso brass player.

His unaccompanied tuba introduction to the final number before the encore exposed his chops in fine style. At first he recalled a melodic foghorn, but then utilized deep multiphonic chords which to round off his phrases, to which he then added a higher vocalized layer, creating a less predetermined human element amid the orchestration. A double tongued tuba passage, affirmed by the band with earthy riff and Arabic counter melody segued into a tuba/piano/percussion section which invoked a dream sequence, with jazzy piano accents and runs against a loose backing. The short hymnal encore was a fitting end to a concert which combined disparate facets into a cohesive whole.