The idea of 'music' with no underlying chords or melody or rhythm leaves me cold. 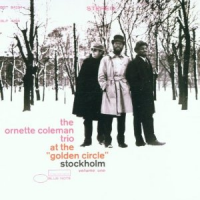 Let's start with a disclaimer: I'm not a fan of free jazz. So why would I even bother with an album I was pretty sure I'd dislike?

There's a practical answer: It was on sale. I was in a record store recently that was having a buy-one-get-one-for-$1 sale. So I got a CD I knew I'd like and then saw Ornette Coleman at the Golden Circle, Volume One. Did I mention I collect Blue Note CDs? It's the name of this column.

So I listened to it three times all the way through. Hey, I try to have an open mind for all kinds of music. Tastes changes over time. I thought maybe if it became familiar, I might like it better.

So what is it about Ornette Coleman generally and this CD in particular that turns me off? Let's start with the tone. The alto sax can be kind of shrill. Of course, it can also be sublime. Consider almost anything by Charlie Parker. Suffice to say Ornette Coleman is not Bird. It doesn't help when you go out of your way to make the alto screech and squawk. This is one harsh-sounding album.

Then there's the trio format. To my mind, it's hard to make a sax-bass-drums trio interesting. Not impossible, mind you. Sonny Rollins' Way Out West is pretty fantastic. But by its very nature, a sax with no piano, guitar, horn or other melody maker can be pretty monotonous—just one long, long uninterrupted solo. (I sometimes wonder what I would have thought had I heard Sonny Rollins on the Williamsburg Bridge in 1960, playing all by himself for hours on end. I like to think I would have said, "Wow, that's amazing!" More likely I would have walked on by and thought, "Interesting sax. Call me when you find a band.")

Finally, there's the whole notion of free jazz. The idea of "music" with no underlying chords or melody or rhythm leaves me cold. Can a bunch of guys playing together, with no preconceived ideas, eventually hit on an interesting tune or cohesion, just by long improvisation? Sure, I guess. I'm just not patient enough to wait for it to happen.

I like melodies, including improvised melodies. As I listened to At the Golden Circle, I occasionally heard ideas and snippets that sounded interesting. I would think, "OK, now we're getting somewhere." But inevitably the improvisation would move on and I'd feel lost again. Most jazz doesn't feel that way. Ornette Coleman does—at least to these ears.

As a Blue Note collector, I'm glad I have this CD. But it's not one I'll return to very often, and maybe never again.