By DAN MCCLENAGHAN
December 26, 2008
Sign in to view read count 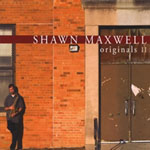 Multiple reedist (alto saxophone, mainly) Shawn Maxwell titled his fine debut CD Originals (Self-Produced, 2005). It was an apt tag for a set of all original tunes, played by Maxwell and an excellent backing unit fronted by the leader's distinctively tart and intrepid horn sound. His sophomore outing, Originals II, is more of the same, and pushes his modern approach—with a strong rooting in the bop tradition—forward a notch or three.

The set opens with "Rice" (there are some odd song titles here), and the group has a mood of freshness and good time spontaneity behind Maxwell, whose alto tone has a loose, honking and rather rough-hewn feeling to it. This, and much of the set, gives a '60s Blue Note Records vibe, pushed into the new century.

"Duck Snort," in spite of a title that might imply otherwise, swings easy, and pianist Mike Nelson solos with an impressive gusto. "Year Three" features Maxwell on flute, blowing light, frosty lines around Graham Czach's bowed bass and the spare tinkle of Nelson's piano, on a pensive and classical-sounding break in the bop atmosphere.

"Grimlock" gets a glow of electric keyboards and a tight groove, sounding a bit Yellowjacket-ish, and on "Working Dog" guest trombonist Johanna Mahmud opens the tune with bold tones before Maxwell moans in on bass clarinet in front of an organ simmer. Vim and vigor is the name of the game with "Leather," fronting the band with a dark, woody tone on clarinet, while Nelson steps light and breezy on the keys, and on "Sodor," Maxwell blows with a Paul Desmond, dry martini sound.