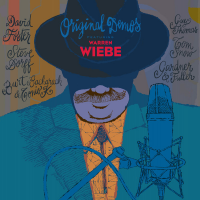 From the accounts of nearly everyone who heard him, Warren Wiebe was "a singer's singer." After kicking around in several bands between his native San Diego and Los Angeles, songwriters Burt Bacharach and David Foster ran across Wiebe's pure tone and apparently effortless range, and Wiebe became the go-to demo singer for many of southern California's most successful songwriters. "We were kind of like Edger Bergin and Charlie McCarthy, only I was the dummy and Warren made me come alive onstage," Foster reflected after Wiebe's 1998 passing.

But the downside of "a singer's singer" is that few people outside the songwriting industry got to hear Warren Wiebe sing. He sang backup on many others' hit records. He sang a charming duet with Gloria Estefan ("Is It Love That We're Missing") on Quincy Jones' landmark Q's Jook Joint (1995, Qwest). He sang at Celine Dion's wedding, and at the funeral for US Congressman Sonny Bono. But Wiebe didn't write his own original music and never released an album of his own.

Warren Wiebe: Original Demos, released in 2018 in a limited edition of 1000 numbered units, fills this gap with brilliance and heart. Containing previously unreleased music written and performed by Foster, Bacharach, Tom Snow and many others, it celebrates both Wiebe's vocal prowess and his memory. One of its most compelling features is the companion booklet which features composer's notes on each tune along with this love note from Contante & Sonate head executive Gabriel Raya: "Warren Wiebe wasn't just gifted with the most gorgeous voice imaginable. He had that essential ingredient which makes a singer unique: soul."

Foster shares a telling memory in his notes to "The Colour Of My Love," which Celine Dion recorded as the title track for her 1993 (Epic) release. After listening to Wiebe's demo version, Foster writes, she told the composer, "I can't sing that song after that man; he has the most incredible voice I have ever heard." That voice is powerfully clear and clean and crisp and sweet, like the succulent first bite of some heavenly fruit, in this "demonstration" performance.

Wiebe's voice finds and fills every nuance of every note behind every word in Bacharach's "Never Take That Chance Again" (co-written with Tonio K.) like musical honey. It climbs this melody, including Bacharach's trademark melancholic yet hopeful horns, and then soars off the peak of its chorus into powerful and potent soul pop balladry. (Diane Schuur recorded this for her Friends for Schuur album [Concord Jazz, 2000].)

Tim Feehan wrote "Make A Wish" for the public competition to write the official song for Canada's 125th anniversary in 1992, and it brings a sparkling and cheery conclusion to this bright songfest. You can nearly hear Wiebe's voice smile as it dances and leaps over lyrics so hopeful and full of promise. If only we could "Make A Wish" to hear Warren Wiebe sing once more.

Personnel: Warren Wiebe, vocals, with David Foster (The Colour Of My Love, Live Each Day; Burt Bacharach & Tonio K. (Never Take That Chance Again, Love Made Me Wait); Steve Dorff (A Little Thing Called Life, The Echo Of Your Whisper; Tom Snow (You're Welcome In My Life, Spend A Little Time With You);Gardner & Fuller (17 Years, Nothing That I Wouldn't Do); Guy Thomas (The Day I First Saw You, Lorelei); Tim Feehan (Don't Tell My Heart, Make A Wish).