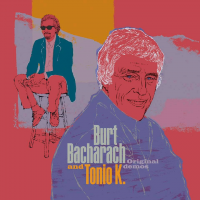 Many if not most artists will confess that the best start to a great recording or performance is a great song. Across more than five decades, composer and pianist Burt Bacharach, in tandem with Tonio K., Carol Bayer Sager, Hal David and other lyricists, has written more great songs than just about anybody else.

Burt Bacharach and Tonio K. Original Demos compiles more than a decade's worth of highlights from their collaborations, and simultaneously presents two "one of a kind" opportunities. Compiled by "Señor K." with Bacharach's permission in tandem with Contante & Sonante Records in Spain, Original Demos opens a window into the duo's song writing and production process, presenting sketches of songs eventually released by Bacharach, songs released by other artists, and songs never released at all. Second, only 1000 CDs were printed and released. When they're gone—they're gone.

Two tracks immediately stand out. Brian Wilson, the primal creative force behind the The Beach Boys, met Bacharach at a Grammy event, where two of America's most brilliant songwriters decided they should write their first song together. Wilson brought the verses and Bacharach added the chorus to "What Love Can Do," which is packed, stacked and multi-tracked with Wilson's trademark, lush vocal harmonies and a bouncy piano melody that singer John Pagano (lead male vocalist in Bacharach's road band) flies like a kite floating aloft on its breeze. You can hear Wilson's own version on the 2007 compilation New Music from an Old Friend (One Eighty Music). What took these two so long—and can we please hear another one?

Rufus Wainright sang the official version of "Go Ask Shakespeare" on Bacharach's At This Time (2005, BMG/Sony), which won that year's Grammy Award for Best Pop Instrumental Album. Original Demos retains that killer instrumentation, built around drum and bass loops by Dr. Dre. Dre's beat sounds just sinister enough, and the string arrangement heightens it like moonlight reflecting off a switchblade. "The way I've always described what Burt came up with is: Somewhere in the area of Stravinsky meets Gershwin meets hip-hop, with top line Bacharach melodies," Tonio explains. But this version swaps out Wainright's for Bacharach's own weary and broken lead vocal; its impact is stunning and radiates the feeling that Bacharach held these words so dear that he had to sing them himself. (In his liner notes, Tonio wryly points out that, while Burt hangs onto the Grammy, he has a certificate for participating as a lyricist on an award-winning instrumental recording.)

Original Demos also debuts "Do You," the only song that Bacharach wrote with Jerry Leiber even though their shared history goes back to 1960s Brill Building pop.

Bacharach sits in the pianist's chair for "Never Take That Chance Again," in which the background vocals magically "talk back" to the lead lyric, later produced by Phil Ramone on Diane Schuur's Friends for Schuur (1999, Concord). In "If I Should Lose You," which Chicago picked up for Chicago XXVI Live (1999, Chicago Records), Bacharach's piano playing is so thoroughly complementary—a ripple in the melody, a chord for more solid footing as the music changes direction—that it's easy to completely overlook.

If I Should Lose You; Change My Mind; Never Take That Chance Again; Tell It To Your Heart; Where Does Love Go?; Love’s Still the Answer; Count on Me; Do You?; Go Ask Shakespeare; It Was You; What Love Can Do; You And I; When You Lose (Love) Somebody; Someday.

About Burt Bacharach and Tonio K.