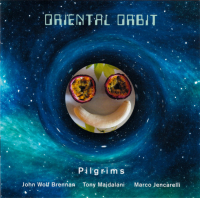 This International trio's second album contains an East meets West nomenclature, but a case can be made that their unique bridging of various modalities defies strict categorizations. Enhanced by audiophile qualities, the recording radiates a mystical communion of diverse instrumentation that toggles between conventional world jazz norms and a horde of tasty abstracts or pieces where Marco Jencarelli's electric guitar lines signal glimpses of jazz fusion. Vocalist, percussionist Tony Majdalani's Middle Eastern-based chants on various pieces float above John Wolf Brennan use of arcopiano, accordion, zither and melodica. Essentially, the keyboardist looms as the nucleus of this first-class outing.

In his liner notes Peter Monaghan aptly states that, "The pieces that the trio explores or creates take shape from the three pilgrims' peeling layers away from inside and around the melodies, searching behind every groove or fragment to see what is waiting to be discovered." Hence, the musicians' layered sound- sculpting processes and buoyant cadences amalgamate a polytonal vista via subtly complex song-forms and surreal imagery tinted with enchanting exchanges. But it's not a slow-moving, easy listening type endeavor as the artists flaunt their chops and upbeat creative sparks on a continual basis.

The band often executes medium-tempo works featuring Majdalani's fluent acoustic and electric guitar phrasings, as Brennan's rather mysterious oudpiano keyboard does sound like an oud with keys. He also imparts jazz improv during several movements, yet largely circles around a given melody line or primary theme as the musicians delve into rhythmic call / response implementations throughout. On "Ourboros," it sounds like Brennan's melodica is plugged in, offset by Majdalani's sprightly world percussion grooves. However, "The Now is a Knot in Time" features the keyboardist's intricate zither phrasings to complement his bandmates' vocals, and counterpoint, all embedded within their guileful thematic developments.

"Another Choice: for Finnegan's Sake," is the lengthiest piece at 11:23. Here, Brennan's emphatic and entertaining interpretation of James Joyce's Finnegans Wake is extracted from an online project of some capacity, stemming from an audio book. It's a slice of literary lore with a modern twist. Otherwise, Brennan adapts a frequently used Sun Ra message for the trio's motto, that "Music is the healing force of the universe." In simple terms, these words duly encapsulate the artists' resonating output.

The Now is Not in Time; Hang Loose (on a Camel in Obernau); Water Whole 1; Oriental Belles; More than Two; Ouroboros; Water Whole 2; Arosa-are you Hear?; The Now is a Knot in Time; Water Whole 3; Occidental Orbit; Another Choice: for Finnegan s Sake; The lost Papyrus Roll.