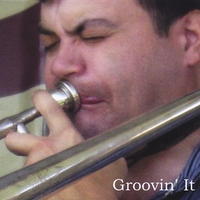 Trombonist Jay Vonada heads up two trombone-organ-drums trios called Organ Trio East and West. His Organ Trio West consists of himself and organist Alex Sell and drummer Kevin Lowe. Groovin' It consists of nine compositions, original and standards, presented in this novel and provocative format. While organ trios (de rigeur sans bass) are nothing new, they typically include a guitar or tenor saxophone, or both (in which case it is a quartet). Vonada's trombone provides the sturdy format with a low brass lead that works better than expected. This is accessible, low- impact music that does not require an advanced degree to understand or enjoy.

Each member of the trio has his hand in composing or arranging. Vonada composed five of the pieces, Lowe—two of the pieces and Sell arranges an orchestral take on the Rogers and Hart classic "Where or When." Mellow is the order of this recording. By virtue of the trombone alone, this music is not intended to make it above a simmer no matter how much grease Sells pours on. "Groovin' It" and "Let It Roll" are the two most smoldering pieces on the disc and they remain understated. This is not music to start a fire with, but it is music with which to stay warm. Shine on, Jay Vonada.

Groovin’ It; The New Day; Not A Thing; Gentle Breeze; Where or When; Breakers; Let It Roll; In a Hurry; Let It Roll (alternate take).