By ERNEST BARTELDES
August 14, 2010
Sign in to view read count 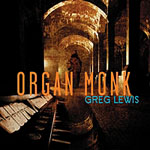 Reinventing the music of Thelonious Monk is no easy task, but organist Greg Lewis does precisely that on Organ Monk. Backed solely by drummer Cindy Blackman and guitarist Ron Jackson, Lewis goes through fifteen of Monk's timeless classics, adapting them to the feel of an organ trio.

Kicking off with an up-tempo take on "Tinkle Tinkle," the disc starts with a drum/organ duet that gives way to a flawless guitar solo from Jackson, before quickly closing with the outro. Lewis is at the forefront of "Jacking," with a few accents from Blackman, who enhances the bandleader's solos with precise touches on the cymbals. Jackson is featured on "Light Blue," where a simple blues structure gives the musicians plenty of space to improvise. Other guitarists would have used the opportunity to overplay, but Jackson plays suitable solos, while adding clever chords during Lewis' improvised moments.

"Coming to The Hudson" is one of the disc's best moments, as the musicians sound perfectly in sync. Jackson takes the first solo, which evolves from a simpler sequence to a flurry of notes at the end, when Lewis takes over and closes with his own improvisation. Unfortunately, Blackman fans will not hear many of her usual pyrotechnics here, as she competently adds to the music without ever stealing the spotlight.

Organ Monkis a highly enjoyable disc with that reveals more with repeated spins. Anyone willing to play such complex bass lines with their feet deserves praise. What might Lewis' follow-up be: maybe a selection of Mingus' canon for the B-3?