By JIM SANTELLA
December 1, 1999
Sign in to view read count 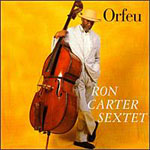 Active in both classical and jazz circles, bassist Ron Carter has also shown a preference for Brazilian music throughout his career. He's returned to Brazil each January for the past six years to perform with his ensemble and to learn from local artists. Carter, 62, and one of the most recorded jazz players of all time, wrote most of the pieces for this latest album with care taken to preserve authentic stylistic concepts. Houston Person's lyrical lead, Bill Frisell's unique, interwoven guitar voice, Stephen Scott's percussive piano fills and Carter's solid rhythm section characterize the session as authentic Brazilian music with a jazz slant.

Carter's "Por-Do-Sol" parades down the street with a light bouncy samba texture while "Saudade" sweeps around the ballroom in waltz time. "Manha de Carnaval," featuring Person's caressing tenor, pours out gracefully with a lyrical manner and heartfelt expression. A bossa arrangement of "Goin' Home" and a laid-back arrangement of Carter's bluesy "1:17 Special" keep the pace going strong. Bassist Carter takes the lead on "Samba de Orfeu" and expresses the same deep love for a melody that Person and Frisell display throughout the program. Highly recommended, Ron Carter's Orfeu combines mainstream jazz with lyrical Brazilian charm for an outstanding session.