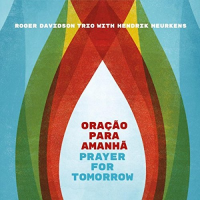 Roger Davidson was born in Paris in 1952 to a French mother and American father. The family moved to New York when he was one and he started playing the piano when he was four. He took a Master's degree in composition in composition in 1980 and another in choral music in 1985. Initially he was steeped in classical music but twenty five years ago, as the result of attending the Stanford University Jazz Workshop, he started playing jazz and his first trio album was Ten To Twelve recorded in 1992. Now with well over twenty albums to his name, this is the first with a new trio and featured soloist Hendrik Meurkens, the German born virtuoso of the vibraphone and harmonica.

Oração Para Amanhã was recorded live at the Zinc Bar, New York City on several nights in May and October 2016. The venue is a haven for Brazilian music of this type, a genre in which Davidson specialises. The allegro opener "September Samba" sees guest star Hendrik Meurkens on vibraphone with piano and vibes stating the memorable melody line. "Sonho Da Tarde" employs a similar construction to Antonio Carlos Jobim's "How Insensitive" thus rendering it almost familiar but exuding its own intrinsic charm. The appropriately lively "Rio De Janeiro" comes as a contrast to its more sedate predecessor "Oração Para Amanhã."

On the dulcet "Amor Brasileiro," Meurkens lyrical harmonica playing recalls that of the late Toots Thielemans. But more often than not the mood is upbeat and Samba-rich such as evidenced on "O Trem Da Vida" and there are piano-focussing numbers too such as "Três Estrelas" where Davidson is heard playing solo. Meurkens's masterly harmonica is also heard on "A Escada" and the closer, the vibrant "O Verão." Overall this is a satisfying set of Davidson-composed Latin tunes which is pushed up a notch by the presence of the redoubtable Meurkens.