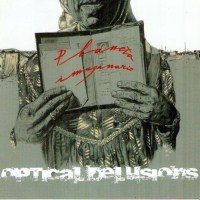 The term "progressive," when used to describe jazz fusion/rock, suggests a constant forward movement in the music. On Optical Delusions, Planeta Imaginario's third release (and the group's second for international distribution outside of their homeland of Spain), there is a shift towards a sort of larger jazz group sound. The Barcelona-based group delivers thirteen intricate compositions and themes that reckon their Canterbury-flavored music with an overall Gil Evans-type vibe. The omission of guitar on this release contrasts with PI's last CD, Biomasa (Cuneiform, 2008).

Keyboardist/leader Marc Capel asserts his tone from the onset of the first song, "Collective Action (Accio Col-lectiva)," laying down a solid Fender Rhodes, with his Hammond organ pushing behind it. He lays into his Yamaha and other synthesizers at just the right moments, filling in the right measure of color and sound effect on "The Garden of Happy Cows (El Jardi de Les Vaques Alegres)." There are some reflective and pastoral moments on "Good Luck, My Friend (Bona Sort Amic Meu)" and "Introduction to Sidewalk Licker (Introduccio de Llepavoreres)," where Capel's solo piano work reveals finer impressionist and classical instincts.

On "Xarramandusca (Including Exile)," the sound of Soft Machine's Fifth (Sony/BMG Music UK, 1972) period appears in the music, but with a twist. Multi-reed player Alfonso Munoz takes an Elton Dean-like stance toward a sort of Anthony Braxton-versus-drums crescendo. Drummer Vasco Trilla Gomes dos santos modulates his solid support between pushing bassist Dimitris Bikos and shadowboxing with the various horns on "Hemangioma." Main co-arranger and trombonist The-Hien Trinh compliments songs like the opus-like closer, "The Sea...And Later The Sun...And The Reflection (El Mar. I Llavors Sorti El Sol.. I El Reflexe)," with graceful phrasing.

The King Crimson, Frank Zappa, and Henry Cow moments have not completely left the music, but there is simply more space. The music benefits from having enough guest horns on tap to give it full body. The sophistication of the arrangements are grounded in solid compositions that exalt feel over chops. With its larger ensemble sound, Optical Delusions appears to be Planeta Imaginario's most ambitious disc to date, as well as one of 2011's most robust releases.