By JAMES FLEMING
November 20, 2018
Sign in to view read count 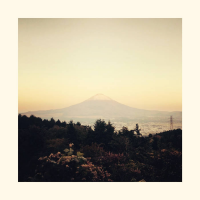 Like blasts of radio static, the electronics on tracks such as "Into The Tunnel" and "Tuesday" of Norihiro Kikuta's album contrast starkly with the spacious, pastoral acoustics of the aphoristic tracks such as "Prospect Park" and "Hudson Park." So short are most of the tracks on the 14-song tracklist that rather than evoke musical comparisons, they are more akin to the strange lilting poems of Richard Brautigan—where all the gentleness of a meadow breeze is channeled through the stanzas contained in Rommel Drives On Deeper Into Egypt and The Pill Versus The Springhill Mining Disaster. "Hancock Street" is so spacious as to be almost empty. But that emptiness, rather than seeming vapid or void, conveys a sense of expansiveness. As if the titular street stretches on into the sunset. While the following track, "Akarui Mado," opens with an electronic stuttering, the sound of the street's lights humming into life.

On tracks such as the aforementioned "Into The Tunnel" and "Itsukara," Kikuta's ideas are explored in more depth than on the short, breezy snippets that make up most of the album, with many tracks clocking in at under 20 seconds. But far from sounding unfulfilled or unexplored, they tantalise like unconfirmed rumours of an impending joy. "Grand Central"—all 15 seconds of it—opens with chiming, pure harmonics. And closes with a chord gentle as a caress. As if Kikuta, rather than strum a guitar, balanced a nebula on his fingertips. And held the gaseous, shifting body up to a microphone, to record its faint whispers. "Waltz"—at a comparatively lengthy 2:55 minute—shines with an electric glistening. The sharp shards of noise as pure as the harmonics of "Grand Central." But they are a wholly different, keener sound. And a strong contrast to the angelic opening guitar chord. "Birds" jaunts by as cheerfully and colourfully as a robin on snow. A fleet-fingered, 8-second picking at the guitar that's as sweet as any winter berry. Similarly, "Gelato!" sounds like a child's exclamation of happiness. A short, cheerful sound that moves by as fleetingly as its brethren on the tracklist. Running for an all too-brief six seconds.

What Oporo lacks in length it makes up for in content. Its ideas are all excellent and are delivered well. Like a short story, they convey single moods or scenes. Rather than combine to form the lengthy philosophical treatise of the novel. And each of those moods and scenes is an entity unto itself. Small jewels that can be held in the delicate palms of only a few seconds.