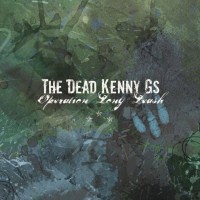 The powerhouse trio known as The Dead Kenny Gs answers the musical question: can a jazz band have an uplift mofo party plan? With its collective experience, the group certainly can take the music one step beyond.

Like their inspired namesakes, the 1970/80s punk band The Dead Kennedys, saxophonist Skerik, drummer/vibraphonist Mike Dillon, and bassist Brad Houser play music loud and fast. Well, sometimes slow, but definitely loud. Their debut release draws on their experience together and in other groundbreaking bands. Brad Houser, probably best known as the founder of the New Bohemians with Edie Brickell, was a member of Critters Buggin,' Seattle's answer to NY's Downtown music of the 1990s. Fellow members Skerik (Ponga, Stanton Moore) and Dillon (Go-Go Jungle, Ani DiFranco) also cut their teeth with Les Claypool and are current members of Garage a Trois, with Charlie Hunter, who guests on one track here.

Recorded and mixed like a noisy clamorous rock album, the presentation bounces between "Black Truman (Harry The Hottentrot)," a circus-like take on Herbie Hancock's Headhunters tune "Chameleon" and the power-slab of speed metal "Sweatbox," that turns into a flaming klezmer piece fueled by Hawaii Five-O drum rolls. The trio alludes to the Ponga's heavy keyboard groove with "Black 5," Naked City's time changes on "Melvin Jones," and the British Ska band Madness' "One Step Beyond," with the saxophone anthem "Luxury Problems." Mike Dillon takes the vocals on "Black Death," which draws inspiration from early Red Hot Chili Peppers' Freaky Styley days and they even tap Raymond Scott's cartoon sounds on "Black Budget." Lesser musicians might not have been able to pull this one off.

About The Dead Kenny Gs