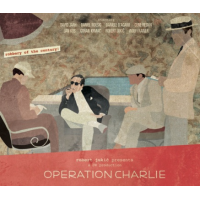 The earliest musical memories Robert Jukič has were being exposed to classical music, which provided him with a comfort zone and put him to sleep. Later, before he was old enough to pick them up, he used imaginary drum sticks to play drums, finally gravitating to the real thing when he was 12. He got an acoustic guitar two years later but switched to bass after high school.

Jukič is a prolific musician and composer, finding his comfort zone in several styles. He is as much at ease in rock as he is in pop and jazz, giving boundaries a pliant elasticity in which he fashions his vision. As a bassist he lets his melodic instincts take root before he explores the labyrinths of invention.

Operation Charlie is built around a bank robbery. The concept is interesting in its own, made all the more firm by the story that goes under the covers of the CD jacket and by the music which is exemplary. The compositions spring to life in the melodic concepts and the arrangements with Jukič coming up trumps in both streams.

The lure is irresistible right from the moment Daniele D'Agaro swings in and introduces "Charlie" on the sweet notes of the clarinet, with Jukič adding a robust, melodic bass line. The interplay is frisky, with swing, skiffle and good old New Orleans seeping in and fusing with the crispy rhythm momentum from drummer Wolfi Rainer.

The mood does a complete flip on "The Preacher," which has a funereal air, the blues heralded by trumpeter David Jarh. Nothing is as quite as it seems, as he skedaddles into free terrain on the quick before returning to the groove. The mood is lightened by D'Agaro, who swings out on the wings of the trail set by tubaist Goran Krmac, with Jukič enriching the mood with his conceptualization and expansion of the theme.

The saga continues with the stirring, rambunctious "The Plan," a high flying tribute to Dixieland jazz, before the team moves on to the different chapter stops. All along the way the music is the messenger, one for which the next detail is eagerly awaited. "The End" comes all too soon with tenor saxophonists Cene Resnik and Jan Kus essaying the final passage over a measured beat. Trumpeter Daniel Noesig has his own sense of direction, riding high on the pitch and elevating the farewell.

The CD is a stylistic triumph and comes up spades in its execution.

Charlie; The Preacher; Mr. You-Can-Count-On-Me; The Plan; Mr. High-Strung; The Kid; The Funeral; The Cabuso Brothers; The Getaway; The Boss; Bodyless Soul; The End.