By GLENN ASTARITA
August 11, 2012
Sign in to view read count 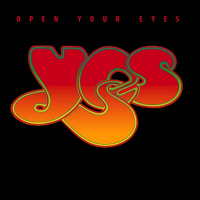 Not well-received among diehard Yes fans, Open Your Eyes was originally released in 1997, and reissued here, in LP format, in 2012. Nowhere as prominent or striking as the band's classic '70s outings, here keyboardist Rick Wakeman is absent and replaced by keyboardist/guitarist Billy Sherwood, who lines up with eminent guitarist and longtime member Steve Howe. The bulk of this material lies between progressive rock and pop-rock, with most of it largely forgettable romps, sans memorable hooks or intriguing song forms. They're diametrically opposed to Yes' classic pieces, often modeled with complex time signatures, ambient/symphonic dreamscapes and British folk music.

In 1982, when guitarist Trevor Rabin joined the band, Yes morphed into a high-end pop-rock unit, and enjoyed extensive radio airplay with the hit "Owner of a Lonely Heart." Personnel shifts once again followed, leading to this outing, primarily designed on solid backbeats and a few odd-metered diversions. However, the prog factor faintly underscores the majority of the program.

"Fortune Seller and "Man in the Moon" are noteworthy compositions, borrowing from pop and featuring vocalist Jon Anderson's tuneful overtones and catchy lyricism. But filler material such as the 23-minute "The Solution" is little more than an electronic backwash, treated with the sounds of nature and vocal choruses that weave in and out every five minutes or so.

New State of Mind; Open :Your Eyes; Universal Garden; No Way We Can Lose; Fortune Seller; Man In The Moon; Wonderlove; From the Balcony; Love Shine; Somehow…Someday; The Solution.