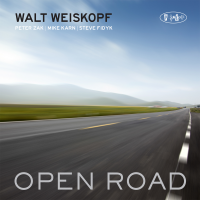 It all starts with the sound of Walt Weiskopf's tenor saxophone. Large, keening, expansive, his tone sometimes threatens to explode and wreak havoc on everything it touches. During lyrical passages and on ballads, he scales the sound back a little, waxing sensitive, tender, even poetic, but not abandoning its core—the moderation usually doesn't last very long. Whether executing a dizzying mass of phrases, braying a long bent note, hopscotching through a convoluted passage, or playing a relatively simple, unadorned melody, the visceral impact of Weiskopf's sound always looms large in the overall scheme of things.

The combination of Weiskopf's tone and impressive technique is indicative of an unusually disciplined approach to the horn. Expect something that sounds raw, entails a calculated consistency, and shows no sign of weakness; friction that always remains in tight fisted control. An act of will, a statement of purpose, its own reason for being, this frequently gut wrenching, sometimes intimidating sound is the gateway to other aspects of Weiskopf's considerable talent.

As tempting as it is to sing Weiskopf's praises and then simply assign him to a concise list of monster tenor players, the horn is part of a larger story. Open Road, Weiskopf's seventeenth date as a leader, belongs in the select circle of an impressive body of recorded work, including Song For My Mother, Anytown, Siren, Sight To Sound (a ten part suite that ranks as his magnum opus), all on the Criss Cross Jazz label, as well as last year's Overdrive, his inaugural disc for Posi-Tone. Though his tenor is as formidable as ever, like all of these records, it competes for attention with Weiskopf's original compositions, arrangements, as well as a penchant for bringing together exactly the right personnel for a particular project.

In the spirit of celebrating an artist who has exhibited a quarter century of achievement and is still at the top of his game, it's time for performers to step up and interpret—and record—Weiskopf's material. (Over the past few years saxophonist Petr Kalfus of the Czech Republic has occasionally performed "Sight To Sound" live with his sextet.) Open Road contains its share of compositions that would enrich other people's repertoire. "Premonition" is a catchy, pointed tune that contains two hooks: A handful of notes in the low end of Peter Zak's piano temporarily break up the flow, and variations of a part of the melody are repeated three times. An artful mixture of protracted tones and darting lines, the up-tempo "Open Road" feels like something suitable for traveling at high speed on an interstate, until Weiskopf trips things up with a brief, stumbling, funky phrase played once, and then echoed four times at the song's end. "Stage Whisper" and "Tricycle" represent Weiskopf at his lyrical, reflective best, both sporting rich, patiently developed melodies. Introduced by drummer Steve Fidyk's rough, boisterous time figures, "Electroshock" is a shifting, holy terror of a ride, abruptly moving from Weiskopf's rhyming, banshee wails, to Zak's throbbing bass note figures, to additional energetic themes executed by the saxophonist while Fidyk and bassist Mike Karn roll with the changes and lay down a firm foundation.

The weak, indecisive, or those lacking in resources wouldn't survive in Weiskopf's company. Zak, Karn, and Fidyk are a band of fitting accomplices, players who share his vision, match his prodigious level of energy, find their own unique ways to serve the music, and give as good as they get. Their inspired support is an important part of another significant chapter in Weiskopf's evolution as an artist.