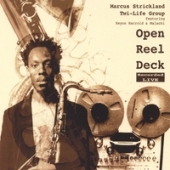 In an All About Jazz.com article titled "What the #%! Happened to Black Popular Music?," the question was articulated on the current state of African American popular music with insights on its past, present, and future. Whether you're nostalgic and miss the sounds of Motown or have a love/hate relationship with the current music scene, the debate will undoubtedly continue. But jazz saxophonist Marcus Strickland could unknowingly be answering part of the question on Open Reel Deck .

Strickland is an aspiring musician, having created a name performing with the likes of drummer Jeff "Tain" Watts, winning the Jazz Times Readers Poll for "Best New Artist" in 2006, and producing noteworthy records including Twi-Life (Strick Music, 2006). Like other contemporaries, his music is a reflection of his environment, soaking up many influences, in and outside of jazz.

Recorded live at the Jazz Standard in April 2007, this is a clear statement of Strickland's ideas with the Twi-Life band—brother E.J. Strickland (drums), Carlos Henderson (bass) and Mike Moreno (guitar). Guests include the fiery new trumpeter Keyon Harrold and pianist Jon Cowherd on one track. Those familiar with Twi-Life can expect more of the same groove-centric jazz, but the striking gong in this band's lineup is heard when the music is blended with the compelling spoken word lyricist named Malachi.

This urban stew and brew is thick with the freedom of live music that is funky, thought provoking, with the band putting down neo-soul beats, "old school" style horn arrangements and free solos. The music is perfectly balanced with Malachi's incredible freestyle—expressing "positive" words/poems about life, music, spirituality, and self-awareness. His voice is an instrument and his words are the notes, backed by the rhythm section and Moreno's chilled guitar riffs on favorites including "Pilgrimage" and "Virture."

A few of the songs feature the quartet by themselves—a ballad, "Subway Suite 2nd Movement," and up-tempo burners "Sneaky Deaky," "Prospectus," and "Volatility." Artistic touches give a few shorter pieces an intentional "Lo-Fi" sound quality that would've been better if they were heard more clearly. But, overall, Open Reel Deck is a resounding success, giving a glimpse into music that thrives with creativity and quality, in the here and now.