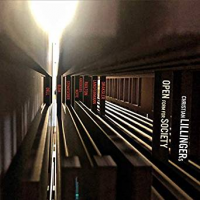 German drummer and über composer Christian Lillinger might be best known for his ensemble Grund which has released several outstanding recordings since 2009. He can also be found in good company with musicians like Peter Evans, Samo Salamon, Luís Lopes, Pascal Niggenkemper, Tobias Delius and Achim Kaufmann, to name but a few heavy hitters with whom he is associated. His Open Form For Society (OFFS) project plays a sort of futuristic chamber music that draws from musique concrète, avant jazz, new music, and hip-hop.

His nine-person ensemble navigates Lillinger's taut compositions which later get reworked, creating an improvisation upon the original improvisations which were improvised upon the original compositions. The music is not so much a Teo Macero tape edit, more like a Martin Tétreault re-imagination. The final product relies on surprise, odd meter, and distortion to keep the listener slightly off-guard throughout. Songs play with a sonic dysmorphia—such as "Piece For Up & Grand-Piano And Ringmodulator" "Laktat," and "Basel"—or, like "KfkA" which impersonates the soundtrack of the most twisted Warner Brothers' cartoon ever, pull the listening rug out from under you. Lillinger and co-producer Johannes Brecht propagate a system of orderliness, creating a sort of controlled chaos. With a percussionist's ear Lillinger molds off-kiltered pulses drawn from a sonic mix of Steve Coleman's M-BASE sound, hip-hop, and randomness. If by random we agree that nothing here is arbitrary or indiscriminate. His percussion background colors the other performers, be they the pianists Antonis Anissegos, Kaja Draksler, and Elias Stemeseder, or the vibes players Christopher Dell and Roland Nephew. The original recordings contained improvisations, but those sounds become pieces and parts of the systematic constructions heard. Lillinger's music is similar to both that of Tyondai Braxton and John Hollenbeck, each musician conceiving new directions in creative musics.