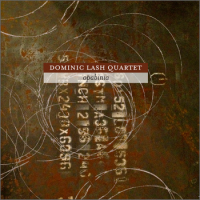 As British bassist Dominic Lash explains in the liners to his Quartet's debut Opabinia, both the album and several of the tracks on it are named after extinct creatures excavated as fossils from the Burgess Shale of British Columbia. That inspiration arises from both the fabulous nature of the animals and paleontologist Stephen Jay Gould's musings on contingency: the role of chance in determining which members of this fauna survived and which disappeared. Lash draws a parallel with how chance events by improvisers exert an influence on the ensuing music. Such a fancy tells you a lot about the music on this disc. Sure there is a cerebral element to both the compositions and their interpretation, but there is also a fair dash of sideways thinking and wit in the execution which negates any hint of austerity.

Long time collaborator Alexander Hawkins ranges across the breadth of jazz piano history, evoking references from Thelonious Monk to Matthew Shipp, sometimes within the space of a single piece, but also provides the knotty involved phrases which create the substructure for the improvisations. A Spanish contingent rounds out the foursome, with reedman Ricardo Tejero blending flowing arid lines with reverberant trills and controlled over-blowing, while drummer Javier Carmona's tippy tappy percussion promotes a light airy feel, which doesn't preclude a muscular swing when necessary.

Though most often associated with the free improv scene, Lash also convinces as a composer, one whose writing has featured prominently in the collective Convergence Quartet. Like drummer Harris Eisenstadt and cornetist Taylor Ho Bynum, his colleagues in the aforementioned outfit, the bassist inserts melody alongside more abstract sound exploration, and the mix of the two can be intoxicating. A variety of approaches unfurl through the ten cuts which contrast brief timbrally adventurous fragments with more fully realized performances.

Unexpected juxtapositions abound, most notably in "Waiting for Javier/Luzern" where a rhythmic figure spread between bass and piano abruptly gives way to shrieking tenor and roiling drums, but also on "Piano Part Two/Catachretic" which starts as an exercise in restraint but blossoms into a jaunty promenade. The spirit of Anthony Braxton haunts the leaping intervals shared by piano and soprano saxophone on "Azalpho," while the funky opening to "Halt the Busterman" ushers in a lithe excursion for Tejero's tenor saxophone, bookended by surging unisons. It's not often that such nuanced charts are matched by such expansive elucidation, but Lash's unit makes the equation seem easy.