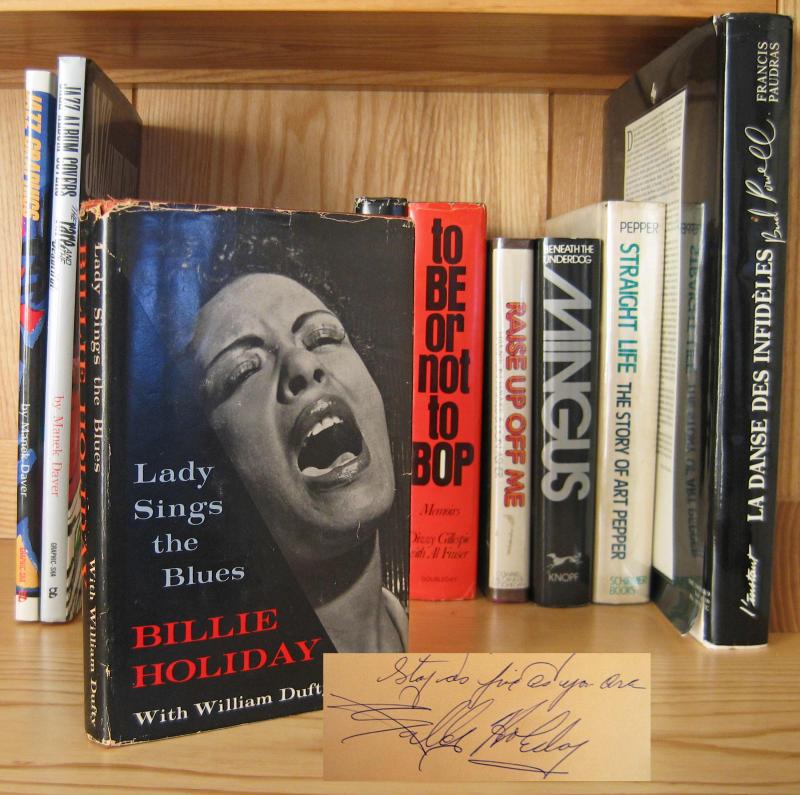 By FRADLEY GARNER
December 7, 2010
Sign in to view read count
Would you pay $8,750 for a used but pampered hardcover copy of the classic Lady Sings the Blues, autographed by Billie Holiday?

If you were a jazz bibliophile with deep pockets, and the book was a declared first edition, "boldly and handsomely SIGNED and inscribed at the first blank page"— and, according to the bookseller's catalogue, with a "strong very good+" dust jacket "unclipped with original price of $3.95" showing—well, you might consider giving yourself, or that special jazzer, a little Christmas read.

There are shelves of used jazz and blues, rock and pop books, many uncommon and expensive, some priced within more Net shoppers' means, at JazzFirst Books.

The owner, Ted Hodgetts, has tried his hand successfully at several pursuits. "Before putting my passions for music and books to work and launching my online jazz bookshop, I spent many years as an artist craftsman, mainly making lathe-turned vessels and bowls in exotic woods." One especially beautiful bowl was used to illustrate a Canadian postage stamp.

"For the past 30 years, my wife Jane, who is a potter in porcelain, and I have operated a studio in a century-old converted schoolhouse, in the Southern Ontario countryside near the village of Millbrook," Hodgetts said in an e-mail interview. "This is where my book business is based, and where most of my energy is now directed."

His online-only enterprise caters mainly to "serious collectors," the dealer continued, "although I do also try to keep decent reading copies of important books in stock at reasonable prices for general readers." Recently, he has moved toward "scarce" (he prefers that to "rare") jazz and blues material, with the focus on signed, first-edition books and memorabilia.

Speaking of editions, Dan Morgenstern, director of the Institute of Jazz Studies at Rutgers University, Newark, commented, "First editions of many a jazz book, alas, is all you're ever gonna see, believe me!" About the photo of the JazzFirst Books shelves with this article, Morgenstern said in an e-mail, "I see...the coffee table Bird volume concocted by Francis Paudras and Chan Parker—what's his price on that?" (Very uncommon unbound, but in the original presentation box, and still uncatalogued, it's $875.) "And there's Dizzy's To Be Or Not To Bop, an interesting read."

"I usually keep unsigned firsts of To Be Or Not To Bop in stock," Hodgetts responded. "Right now there is quite a nice copy at $80. They usually run between $75-$100, depending on the condition of the dust jacket, which is very vulnerable to sun fading."

"Copies signed by Diz are now increasingly uncommon and priced accordingly, but I do have two in stock," he added.

Ted Hodgetts catalogues in most of the standard genres: history, biography, arts and photography, criticism, literature and "ephemera." He has sold, among other things, a (yes) "rare," early William Claxton photo proof for his LP cover of a 1953 Pacific Jazz recording of the Gerry Mulligan; a signed Billie Holiday recording contract from 1940; signed correspondence from the great Swing trumpeter Bunny Berigan, and signed first editions of the autobiographies of Louis Armstrong and Anita O'Day.

Here's a sampling of scarce items currently in stock:

An August 1958 edition of the UK Jazz Journal signed by Lester Young next to his photo on the front wrap, just six months before the iconic saxophonist's death. The signature is tellingly fragile.

An uncommon, signed first edition of Jelly Roll Jabbo and Fats: 19 Portraits In Jazz (1983), a collection of reviews and musicians' profiles by the late jazz writer Whitney Balliett, whose prose graced the pages of the New Yorker magazine for many years.

Original vintage photographs signed by Chick Webb, copies of which have been loaned to filmmaker Jeff Kaufman, for his anticipated documentary about the great drummer, The Savoy King: Chick Webb And The Swing Of Harlem.

A first edition of Music on My Mind (1964), Willie The Lion Smith's marvelous memoir, signed by the Lion.

For readers of more modest means, these are also interesting titles:

Donald Clarke, a jazz and popular music scholar of Allentown, Pennsylvania, has written what the JFB catalogue calls "probably the best of the recent Sinatra biographies." All Or Nothing At All: A life of Frank Sinatra (Macmillan, London, 1997). Hodgetts sold a secondhand copy of the first British edition—but you can read the book free, online at donaldclarkemusicbox.com.

"Ted Hodgetts obviously knows his stuff," says Clarke. "The info he provides about each offering is much superior to what you usually see at Amazon or eBay, and some of the prices are not high at all, depending on what he sees as the scarcity of the edition."

Hodgetts also buys jazz and blues books in good condition and signed "musical ephemera" such as photographs, artwork and vintage posters. But not vinyl records or current music magazines. Visit his website for particulars. 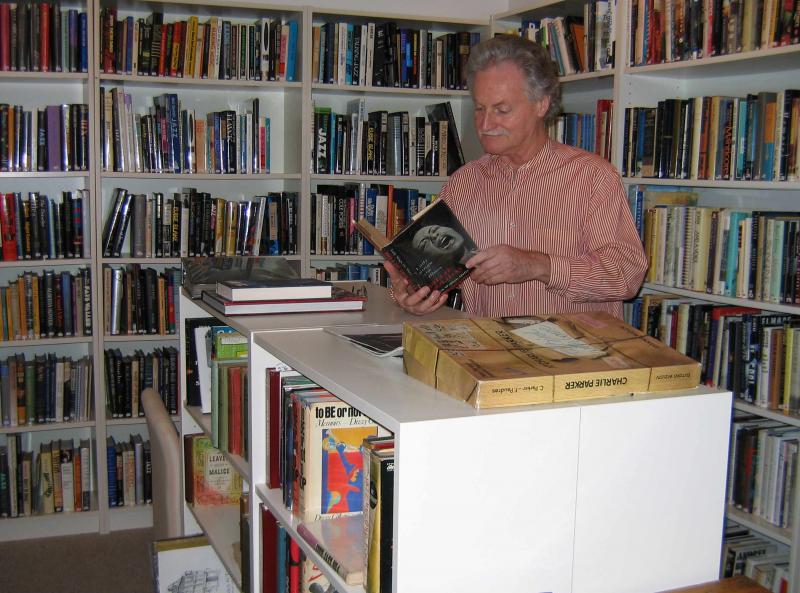 As for Clarke's own biography of Billie Holiday, Wishing on the Moon (Viking Penguin, 1994), JFB has sold an "uncommon first edition" and is on the lookout for others. The book is still in print. Libraries have it, and if you click the title on Clarke's website, you'll be taken to Amazon.com to buy a copy. An e-book and audio version can also be ordered from online booksellers like Barnes & Noble and Amazon.com.

"Hodgetts' website is superbly designed, everything such a site should be, and nothing more, so that browsing is a pleasure," says Clarke. "The selection of jazz books and collectibles is the best I've ever seen." The jazz author referred to "lots of mouth-watering items, like Wilder Hobson's American Jazz Music, a first edition from 1939 for $75. "I'd pay that," says Clarke, "if I could figure out how to get it into the house without my wife seeing it."