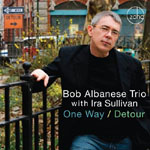 When Bob Albanese was accompanying singer Ben Vereen in Palm Beach, Florida in early 2008, the pianist seized the opportunity to document his distinctive approach to modern acoustic jazz. With the aid of bassist Tom Kennedy and drummer Willard Dyson, Albanese called on legendary saxophonist Ira Sullivan, a longtime resident of Florida, to record One Way/Detour. In trio and quartet settings, Albanese leads the way through a fiery set of original and standard material.

The disc opener, "Major Minority," maintains a brisk jazz waltz tempo, with a sneaky two-against-three swing feel thrown into the piano solo. The trio's intuitive interplay on the Albanese original is reminiscent of classic recordings by pianist Bill Evans from the '70s.

Dyson's heavy-footed samba pattern propels the enticing "Morning Nocturne" with a harmonic sequence in-line with the lushness of a Brazilian classic. The elasticity of "Joyful Noise" contrasts nicely with the more straight ahead, in-the-pocket groove of "Waiting for Louis." The latter finds Albanese and Kennedy digging deep into the bebop well with an intensity that is graceful and unhurried.

The presence of Sullivan on the disc's more standard fare allows for a few moments of introspective breath catching. Although far from overbearing, the veteran reedman demonstrates an authoritative approach on tenor saxophone, soprano saxophone and alto flute. The duet between Sullivan and Albanese on "Midnight Sun" is an emotional highpoint of the recording with Sullivan's warm soprano tone singing beautifully.

The disc closes with Albanese's "Friendly Fire" and an incomplete alternate take of the same tune, "More Friendly Fire." The tune is an up-tempo scorcher through the changes of "What is This Thing Called Love" with an unrelenting energy level and an inspired tenor solo by Sullivan; a fitting closer to a refreshingly spontaneous session.