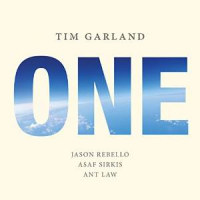 Tim Garland is one of the U.K's most talented reedsmen. He's recorded several albums with Chick Corea including Originations and The Vigil plus orchestral works, The Mystery and The Continents. With virtuoso percussionist Bill Bruford, he recorded Earthworks Underground Orchestra. He's also recorded numerous albums under his own name and with Llamas and Acoustic Triangle. This is Garland's third album for Edition, the first being Return To The Northern Sky (2014), closely followed by Return To The Fire (2015).

"Samai For Peace" boasts a strong, and labyrinthine theme repeated as an intro and outro and punctuating rumbustious solos by Garland on soprano saxophone and Jason Rebello on piano. There's a subsidiary anthemic riff appended to the first theme that sticks to the memory like glue and returns as an inescapable earworm. The opening pastoral melody of "Bright New Year" is driven by Garland's lithe soprano sax, underpinned by Rebello's piano, subtle drumming from Asaf Sirkis and a beguiling 12 string acoustic guitar solo from Ant Law, before returning to the initial theme.

"The Eternal Greeting" sees Garland now on tenor saxophone presenting a lugubrious melody and it's here that the success of the instrumentation; sax, acoustic guitar, piano and drums becomes evident. There's no egotistical vying for attention yet all the musicians are heard equally in a captivating, limpid coexistence.

"Colours Of Night" opens with John Dankworth-esque voicings, lustrous guitar from Ant Law and fluid soprano soloing from Garland. It's rounded-off by a short burst of (uncredited) Konnakol vocals by Asaf Sirkis. The meaty jazz-rock riffing on "Prototype" seems appropriate given that Garland has dedicated this powerful number to the legendary fusion drummer Bill Bruford.

"Pity The Poor Arms Dealer" is a protest song with lyrics by Garland. It's delivered with just the right level of sultry disdain by Dionne Bennett. "Foretold," festooned with dramatic tenor saxophone is embellished with North African percussion adding a further dimension to the kaleidoscopic nature of the piece.

Garland states in his sleeve notes that over the years he's found it just as stimulating to reduce as to augment the number of band members and as a result of this flexibility, his compositions presented here suffer not one iota from the lack of a bassist. One reveals a veritable smorgasbord of diverse, universally appealing tunes, fired by imaginative arrangements and an all-star cast.